[Sponsored Report] Coway designs, innovates to rise from the crowd

[Sponsored Report] Coway designs, innovates to rise from the crowd 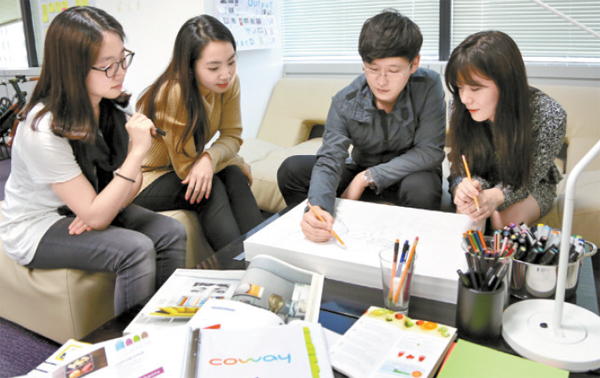 Coway designers discuss new looks for the company’s products. Coway has put design and innovation as its top priority in recent years. Provided by Coway

Coway, the nation’s leading maker of water purifiers, is rising high in the international market with its design-focused management. The company has recently landed in 29th place among some 3,000 global companies in iF rankings, which are determined by all iF Design Awards the company has been awarded by the Germany-based iF International Forum Design GmbH in the last three years.

The company has shown remarkable growth, moving up 25 spots from 54th place in 2011.

Among Korean home appliance makers, the company scored third after Samsung, which ranked first, and LG Electronics, which ranked fourth. The company’s score is even higher than other renowned companies like Dell, which ranked in 43rd place, and Miele, 54th. It is noteworthy that such an accomplishment was made in less than 10 years, which is comparably shorter than the 20 years it took global conglomerates Samsung, LG, Miele and Whirlpool to get to their position.

The company attributes its success to continuous innovation in the design of its products. Coway’s three major products - water purifiers, bidets and air cleaners - take up more than 50 percent of the market share in Korea. Assuming that the quality of the products alone cannot lead to further advancement in the market, the company chose more attractive designs to make even more breakthroughs in growth.

From 2006, Coway has worked to differentiate its design from other home appliances. “Denovation,” a portmanteau of the words design and innovation, became the principle of the company’s management.

The company also encouraged its in-house designers to develop a new look to meet its new design identity: slim, simple and soft minimal. Since 2006, the company has conducted a yearly competition among its employees to launch new product designs favorable for consumers in order to innovate even further. Such endeavors paid off with numerous awards from international organizations. In 2008, Coway achieved a grand slam in four major global design awards: iF, reddot, IDEA and Japan GD. The company has maintained its high performance for four consecutive years, winning all four awards from 2010 to 2013.

“The innovation of design based on our own philosophy made all of our achievements came true,” said Yeom Il-soo, Coway’s chief design officer. “Under our management principle ‘denovation,’ we will continue to devise product designs that satisfy consumers.”