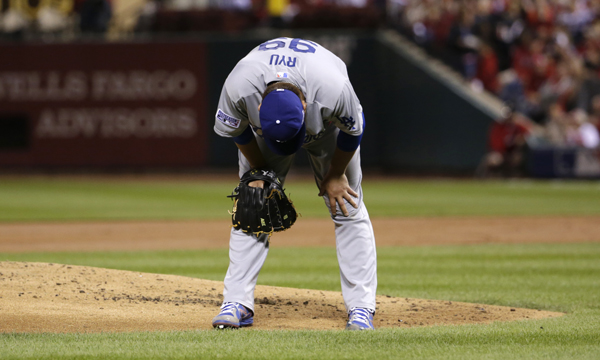 Ryu Hyun-jin of the Dodgers reacts after not getting a strike call on a pitch in first inning Monday against the Cardinals. [AP/NEWSIS]

Los Angeles Dodgers pitcher Ryu Hyun-jin, who returned to the mound after missing nearly a month with a sore shoulder, gave up just one run in six strong innings of work, but it wasn’t enough. Scott Elbert relieved Ryu in the seventh and gave up a two-run homer to Cardinals second baseman Kolton Wong as St. Louis won Game 3, 3-1, to take a 2-1 lead in the National League Division Series.

The Dodgers will start ace Clayton Kershaw on Tuesday, local time, on three days of rest in a bid to tie the series and return to Los Angeles for a decisive Game 5. The Cardinals will go with Shelby Miller.

At Bush Stadium in St. Louis, Ryu threw 94 pitches, allowing five hits, including a home run to Matt Carpenter, and striking out four.

The Dodgers broke through for their only run against the Cardinals’ John Lackey in the sixth inning, when Yasiel Puig tripled and Hanley Ramirez doubled him home.

St. Louis put the game away in the seventh inning, when Elbert gave up a double to Yadier Molina, who moved to third on Jon Jay’s sacrifice bunt before Wong connected.

Another double by Carpenter and Elbert was replaced by Brandon League, who got out of the inning without further damage.

The Dodgers put two men on base, before Cardinals closer Trevor Rosenthal shut the door for his second save of the series.

Despite the loss, Dodgers’ Manager Don Mattingly praised the effort by Ryu.

“I thought he would go about five innings,” said Mattingly. “He threw more innings than expected and gave us more of a chance to win the game.

“It was very surprising that he could stay so sharp on such a long absence. He dealt with both sides of the plate with breaking balls, including changeups. He faced a bit of difficulty in third, but he soon bounced back.”

One of the stories of the game was 55-year-old home plate umpire Dale Scott, who made questionable ball and strike calls from the first inning. Ryu walked Matt Holiday on a pitch that many thought should have been called a strike.

Television repeatedly showed the location of the pitch over an image of the strike zone and Ryu’s puzzled face.

The umpire’s controversial calls continued throughout the game.

With two Dodgers on base in the last inning and Matt Kemp batting with a count of one ball and two strikes, Scott called ball two.

On the next pitch, which seemed to be in exactly the same spot, Scott called strike three.

Again, it was shown on TV time after time, and an angry Kemp disputed the call with Scott.

In San Francisco, the Washington Nationals staved off elimination behind a stellar performance by starter Doug Fister, a Bryce Harper home run and a two-run throwing error by Madison Bumgarner.

The Nationals beat the Giants, 4-1, to cut their deficit to 2-1 and end San Francisco’s 10-game postseason winning streak that started with Game 5 of the 2012 NL Championship Series against St. Louis.