Forced from jobs, retirees enter a game of chicken

Forced from jobs, retirees enter a game of chicken 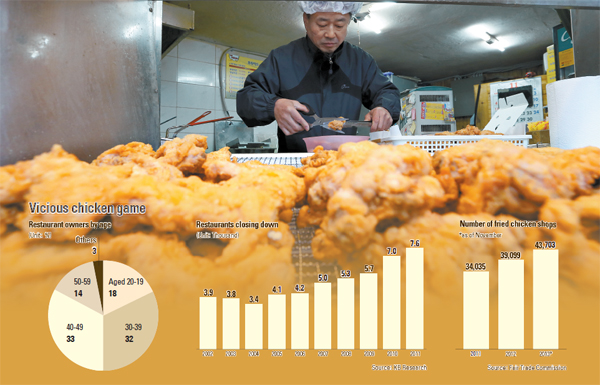 If you search for the word “chicken” on Google Maps, you will see dense clusters of red dots stretching across the country. Fried chicken outlets in Korea now outnumber McDonald’s stores worldwide. At the end of last year, there were 34,492 McDonald’s stores around the world and 43,703 local chicken restaurants.

But the explosion of chicken joints is more than just a widespread culinary fad. The ubiquitous shops have come to reflect two of the country’s entrenched social and economic structural issues ? a weak social safety net and a lack of decent jobs for people in their 40s and 50s.

According to data released by Statistics Korea last month, 50.1 percent of self-employed small-business owners are over the age of 50. The statistics agency said that this is an 11 percent year-on-year increase in the proportion of those in their 50s.

Most of these shop owners are either retired or were nudged out of their jobs and then started businesses using all of their savings and retirement bonuses.

Opening a chicken restaurant is widely considered a safe bet since the snack food is practically worshiped by many Koreans.

Kim Seung-hwan, 52, is among the baby boomers who was “encouraged” to retire early. He had to leave his job at a semiconductor company this year. Kim took a trip to Seoul to attend the Korea

Business Franchise Expo, which was held Sept. 25-27 in southern Seoul.

“I felt really distressed when I retired after constantly being pressured by the company,” he said as he waited in line to receive consultation from one of the country’s biggest chicken franchises, KyoChon.

“When I no longer had a job, I had no idea what to do,” he continued. “I specialize in semiconductor manufacturing, but none of the companies are willing to hire a 50-something.”
Kim still needs to provide for his family and support his sons, who attend university. Without his semiconductor job, the huge tuition fees have forced him to seek out options he never considered before.

“I am not trying to insult self-employed businessmen,” he said, “but I thought owning a franchise is not for a college graduate like me.”
A counselor who represents one of the chicken franchises at the business fair said that many aspiring small-business owners are often overqualified and overeducated.

“Many of the participants who are interested in launching a branch of our franchise are college graduates and some of them even worked for conglomerates that are household names in the country,” said the counselor, who requested anonymity. “The vast majority of them have been asked to retire early and seem to think of this business as their last resort.”

Starting in 2016, the legal retirement age at large businesses will be raised to 60 from the current 55. But for now, many Koreans are forced to leave work in their early 50s.

A 55-year-old surnamed Choi was also among the legions of retired men looking for a new way to make a living at the job fair.

“I believe that men in their 50s feel tremendous pressure,” said Choi, who did not want his first name to be used because he said it was embarrassing to be at the job expo.

“We are not eligible for any government support because it assumes that people at the age of 50 are enjoying a peak earning period or at least have a job,” he continued. “But the truth is that many of us are forced out of our jobs. But we are not eligible for welfare benefits or pensions.”

There are more than 300 chicken franchises nationwide and more than 43,000 individual stores, according to data from the Fair Trade Commission in January. Many in the industry say the supply has surpassed demand.

KB Research, the research institute of KB Financial Group, found in a study released in 2013 that more than half of the chicken restaurants go out of business within three years of opening. Within 10 years, 80 percent of fried chicken houses have closed.

The institute also found that about 5,000 stores close annually.

But despite the number of closures, retirees are still interested in opening a fried chicken restaurant because they’ve witnessed the field booming. Over the past 10 years, the combined sales of chicken outlets increased ninefold from approximately 330 billion won ($308 million) to 3.1 trillion won.

The report also found that the average annual income of business owners in their 40s dropped significantly after they open their own business. Before starting up a chicken shop, the average income of 40-somethings stood at 37 million won, but their income slumped to 24 million won the year after.

The lower income shows how intense competition is among restaurants. Local news media have started calling the oversupply phenomenon “the chicken game.”

The analogy seems to accurately describe the fundamental issue: Competition is so fierce that each chicken seller is eating into the revenue of others.

According to a survey conducted by the Small and Medium Business Administration last year, the highest number of self-employed small businessmen ? 46.4 percent ? said other small stores were their biggest competitors, followed by chain stores run by conglomerates and TV home shopping channels.

“The boom in the chicken business should come as a solemn warning to the government,” said Lee Jun-hyup, a researcher at the Hyundai Research Institute. “It shows how desperate people in their 40s and 50s are to make ends meet. It also exposes the weak social safety net, where people don’t hold out much hope for the pension system and other welfare benefits.”

The government has announced measures to support small-business owners, but they only deal with minor issues.

The government’s new policy, announced last month, protects shop owners’ rights to retrieve a premium they paid to their landlord on leased property when they leave. The measure is aimed at stopping landlords from mistreating small-business people and raising rents. But some experts said that the government should look at the core of the problem.

“The renting issue is only a minor part of the problem,” said Lee of the Hyundai Research Institute.

“The government needs to address how to deal with the employment issue, which is kicking people out [of their jobs] before their retirement age, and focus on establishing social safety nets for those who abruptly lose their jobs.

“The reason why they choose businesses like fried chicken is that it looks easy and has less risk. But the problem is that they are not actually prepared to run the business, but are being forced to do something to make money for their family.”