From left: A still from Walt Disney’s next animated superhero film “Big Hero 6,” which is set to be released next January; a still from Pixar’s upcoming animation “Inside Out,” to be released next year, personifies five emotions with the film’s leading roles; and a sketch of Disney’s animation film “Zootopia,” which is in pre-production and will be unveiled in 2016. Provided by Walt Disney Studios Korea


John Lasseter, chief creative officer of Walt Disney and Pixar Animation Studios, said he will look for inspirations in the myths and legends of Eastern countries for the studios’ future productions.

“Fairy tales don’t always have to be about European stories,” Lasseter said at a press conference held yesterday at Wangsimni CGV, southern Seoul. “The Korean audience is very important to us. We try to make films that can resonate with the audience from this great country.”

It is the second time for Lasseter, who was one of the key members behind the incredible success of “Frozen” worldwide, to visit Korea. He first came in 1995 to promote “Toy Story,” which he directed.

The executive also pointed out that he chose Korea as the first stop on his company’s Asian tour because of the vital role the country has played in revitalizing Walt Disney by showing great support for “Frozen.” 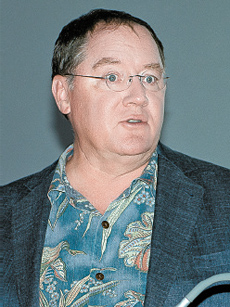 Korea was the film’s third-highest grossing country after the United States and Japan.

“What happened in this country with our movie ‘Frozen,’ is really special” said the 57-year-old Lasseter. “It is unbelievable how the feeling of the studio changed and now they are unstoppable.”

Inspirited by the studio’s recent resurrection, Disney is ready to churn out four brand-new, feature-length animated films in 2015 and 2016.

The first one to be rolled out will be “Big Hero 6” which will be released in January 2015. Its protagonists will be an extremely intelligent 14-year-old young boy named Hiro and his friendly robot, Baymax. Daniel Henney voiced one of the characters, Teddy, in the feature, which Lasseter calls an “inspirational work.”

Next in line is “Zootopia,” which will inherit Disney’s tradition of making movies about talking animals. It is set for release in 2016.

Currently under process of production is fantasy film “Moana” (tentative title), which is set in an area of Polynesia in the South Pacific and comedy-filled feature “Giants.”

Pixar, a subsidiary of Disney that tends to make films using relatively more computer-generated imagery (CGI) than its parent company, will also release three more movies in the next two years.

Lasseter explained that 2015 is especially meaningful to Pixar because it marks the 20th anniversary of its most successful film, “Toy Story,” and will also be the first year that two of its films were confirmed for release in the same year.

“Inside Out,” which Lasseter called the “most imaginative” among its works, is set inside the head of a little girl named Riley. Its main characters are creatures - or feelings called Joy, Sadness, Frustrated, Disgusted and Fear.

“The Good Dinosaur” will follow, a movie that starts with the premise that asteroids did not hit the earth in prehistoric times and that the dinosaurs survived. The last to be announced was “Finding Dory,” which picks up six months after the film “Finding Nemo” (2003) left off.

In the next few months, Lasseter will continue his Asian tour in major markets including Japan, China and Hong Kong. The executive explained that although Disney and Pixar’s management strategies may differ slightly - with Disney sticking to its 90 years of tradition and Pixar being an industry pioneer - both will continue to be “filmmaker-driven studios” rather than executive-driven.

“I inspire them to come up with ideas that they can speak from their hearts so they can put their heart and soul to it,” said Lasseter. “ It is hard, but we think it is the best way. … The heart of the film is like a foundation to a building.”