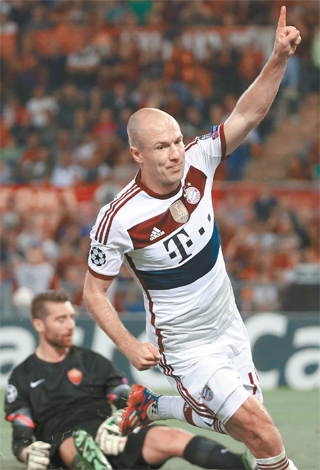 Bayern Munich’s Arjen Robben celebrates after scoring against AS Roma during their Champions League soccer match at Olympic Stadium in Rome. [REUTERS/NEWS1]

On a record-busting night, Chelsea wasn’t far behind in a 6-0 win over Maribor, but Manchester City remained without a victory in three matches after wasting a two-goal lead to draw 2-2 at CSKA Moscow.

Schalke also squandered a two-goal lead before scoring on a controversial penalty in stoppage time to edge 10-man Sporting 4-3.

Neymar and Lionel Messi scored in Barcelona’s 3-1 win over Ajax. Messi’s 69th career goal in Europe’s top-tier competition moved him to within two goals of the record set by Raul Gonzalez. He is tied with Cristiano Ronaldo before Real Madrid visits Liverpool on Wednesday.

Away from the big-scoring games, Paris Saint-Germain edged Apoel 1-0 in Cyprus.

Adriano’s five-goal performance in Belarus - with two goals from the penalty spot - equaled Messi’s five against Bayer Leverkusen in 2012.

Adriano is the first to manage four goals in the first half, doing so in a record span of 17 minutes. With a late penalty, he also matched Messi’s record.

Shakhtar, which has been forced to move from its home in Donetsk because of fighting between Ukrainian government troops and pro-Russian rebels, matched the biggest away victory in the history of the Champions League. Olympique Marseille also won 7-0 at MSK Zilina in 2010.

With eight more matches to be played Wednesday, the record of 63 goals for a match day, set on the opening day of the 2000-01 season, could be broken.

Five-time champion Bayern, which won the title in 2013, made itself one of the favorites this season with an overwhelming performance in Rome, with Arjen Robben scoring twice.

It matched Roma’s heaviest defeat in the competition, a 7-1 loss at Manchester United in the 2007 quarterfinals.

Messi started an outstanding performance at Camp Nou by setting up Neymar in the seventh minute before the Argentine scored in the 24th.

“I am pleased with our game, in the first half we were by far the better side. We created a lot of chances and could have scored two more goals,’’ Barcelona Coach Luis Enrique said. “We could have pressed more in the second half. You have to finish out the match.’’

Eden Hazard netted twice and Didier Drogba scored his first goal since returning to Chelsea in the victory over Maribor. AP