Giants slam the brakes on Royals

Giants slam the brakes on Royals 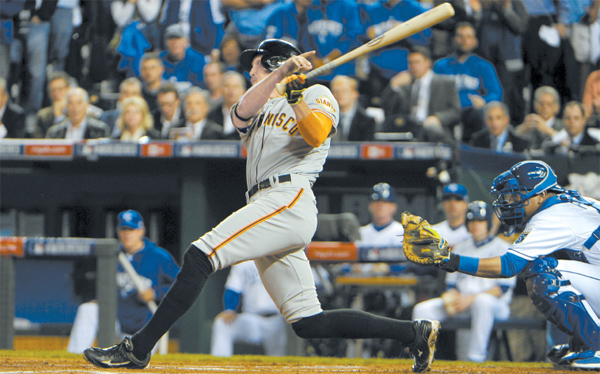 Right fielder Hunter Pence hits a two-run home run against the Kansas City Royals in the first inning on Tuesday local time to give the San Francisco Giants an early lead in Game 1 of the World Series at Kauffman Stadium. [USA TODAY/NEWS1]

Bumgarner pitched shutout ball into the seventh inning, Hunter Pence homered early and the Giants showed their October poise, shutting down the Royals 7-1 Tuesday night in the World Series opener.

From the get-go, the Giants simply did everything right to win their seventh straight World Series game. There’s a reason Bumgarner and these guys in black and orange are trying for their third title in five years.

The Royals, meanwhile, looked nothing like the fresh team that had become baseball’s darlings by starting the playoffs with eight wins in a row - pitching, hitting and fielding all deserted them. 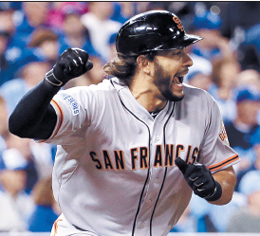 Gregor Blanco led off the game with a soft line drive to center field and AL Championship Series MVP Lorenzo Cain charged, then backed off as the ball fell for a single. It would’ve taken a near miracle to catch it, but that’s the kind of play the Royals had been making.

Moments later, Pence’s two-run homer highlighted a three-run first inning against James Shields. Nicknamed “Big Game James,’’ he once again failed to live up to that billing and left in the fourth with the Giants leading 5-0.

By then, Royals fans who had waited since 1985 for the Series to come to town had gone silent.

Just like that, what many figured would be a tight matchup had turned into a mismatch. And it was a good omen for the Giants - the Game 1 winner has won 15 of the past 17 World Series.

The Royals will try to get even in Wednesday night when rookie Yordano Ventura starts against veteran Jake Peavy.

Bumgarner added to his sparkling World Series resume, improving to 3-0 and extending his scoreless streak to 21 innings before Salvador Perez homered with two outs in the seventh.

“He’s special. He’s got that flair for the spectacular,’’ said Penc. “He never makes it bigger than it is. He just gets out there and competes.’’

The 25-year-old called MadBum by his teammates was in trouble only once. Down 3-0 in the third, the Royals loaded the bases with a two-out walk and cleanup man Eric Hosmer stepped to the plate, but grounded out on the first pitch.

Bumgarner went on to stretch his road postseason scoreless streak to a record 32 2-3 innings as the Giants cruised. He pitched three-hit ball for seven innings, struck out five and walked one.

“He was dynamite. I mean, man, was he good tonight,’’ said Royals manager Ned Yost. “We had an opportunity in the third, and I was really impressed with the way he fed off our aggressiveness and just worked up the ladder to get out of that jam. But he was nails tonight.’’

Michael Morse, getting to play as the designated hitter in the AL park, had an RBI single that finished Shields, and reliever Danny Duffy walked Blanco with the bases loaded.

Rookie Joe Panik hit an RBI triple that bounced past usually reliable right fielder Nori Aoki in the seventh and scored on a single by October force Pablo Sandoval. The MVP of the 2012 World Series triumph, Sandoval also had an RBI double in the first that extended his postseason streak of reaching base to 24 straight games.

Before the game, the mood at the ballpark was positively giddy. Ushers greeted fans with “Welcome to the World Series!’’ and some hot-dog vendors high-fived each other behind the counter.

Yet the Giants wrecked that fun, and won for the 16th time in their last 18 postseason games.

“We didn’t expect to come in here and sweep the San Francisco Giants,’’ said Yost. “We knew that this was a series that was going to go deep. We know how tough they are. They swung the bats really well.’’

The Royals had won 11 straight in the postseason dating to their 1985 championship run, one short of the record held by a pair of New York Yankees clubs. AP