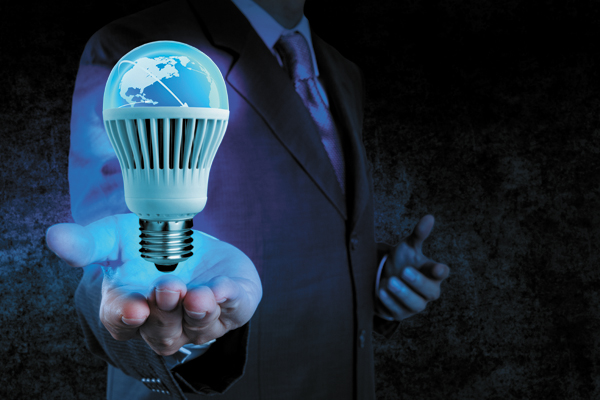 In recent years, Koreans had to cut back on their energy use to prevent blackouts. Some people say the problem could be solved if there were more power plants, but building them takes time, not to mention safety concerns, and convincing local residents.

“We felt shame when asking people to save energy during the power shortage last summer,” said Moon Jae-do, second vice minister at the Ministry of Trade, Industry and Energy at the Sixth Energy Future Forum last month. “If this situation continues for two or three years, it would mean the government is admitting its energy policy has failed.”

But Korea is moving forward as the Park Geun-hye administration adjusts the nation’s energy policy. In the 20-year Second National Master Plan for Energy announced in January, the government said energy policy will focus on the efficient management of demand, rather than an expansion of supply. The plan covers from this year to 2035.

“These new businesses are ‘problem-solving businesses’ that can effectively address issues like climate change, energy security and demand management,” said the Energy Ministry. “They will incorporate the latest information and communications technology [ICT] and be the next growth engine for the energy industry.” 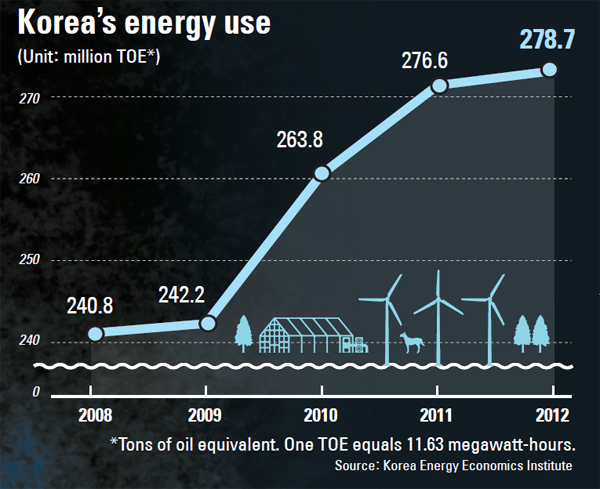 President Park stressed she wants to see active private-sector participation, personally selecting the slogan, “To the Market, to the Future and to the World.”

“Today, it’s not always the government that does something. Private individuals and communities also can create their own energy,” Park said at the New Energy Business Grand Forum last month. “Don’t think that responding to climate change is burdensome work, rather as an opportunity for new businesses and jobs.”

Furthermore, Park promised the government would scrap regulations in order to help boost these businesses and ask state-run companies to support the plan by sharing data and infrastructure with the private sector.

The demand response business, also known as “negawatt,” is about implementing energy-saving systems (ESS) in commercial buildings and factories that have generation equipment as a way to collect unused power to sell in the energy market.

The Energy Ministry is set to finalize the rules and terms for the private energy trading market this month in association with the Korea Power Exchange and open it next month. The government expects it will secure 1.9 million kilowatts of electricity by 2017 through the project. 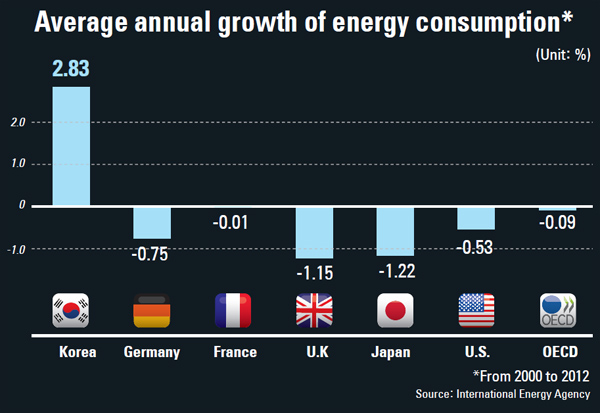 In addition to energy-related companies, the government wants financial and ICT companies to join the market. The goal is to limit direct government involvement.

For this project, the state-run electricity provider joined with local government and LG CNS, Dohwa Engineering and Nexzio. They will form a special-purpose company to invest 330 billion won and complete the project by 2020.

Kepco has posted electricity information for about 63 islands on its Website to lure additional investment to help make other locations self-sufficient. 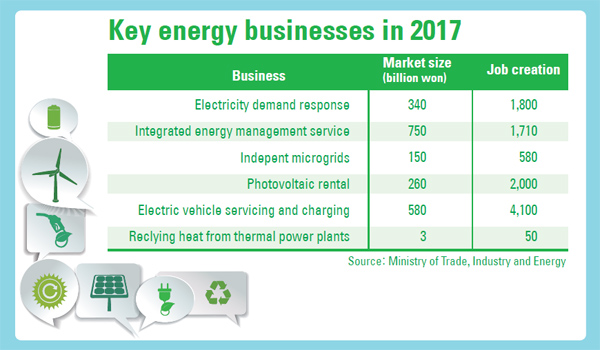 The government aims to install solar power systems in 10,000 households by 2017 by reducing the number of regulations. Previously, only households that used 550 kilowatt-hours per month were eligible for PV rentals, but that requirement has been cut to 350 kilowatt-hours a month.

“To make PV rentals more attractive, we will reduce the contract period from 12 years to seven years and lower monthly fees,” said an official from the Energy Ministry.

To boost the electric vehicle (EV) market, the government is investing in more charging stations. Automakers complain that the government should improve the EV infrastructure as they play to release more models in the Korean market. Although the Ministry of Environment has been working with local governments to expand the number of charging stations, it has not been enough to generate consumer demand for electric vehicles.

For this project, the government will support funding and develop business models with private companies for EV taxis, EV rentals and car sharing, among other business models. The Energy Ministry said it will form a special-purpose company for charging services and aims to establish 5,500 charging stations in the next three years.

The project to recycle excess heat from thermal power plants targets farms and should help farmers cultivate their fruits or vegetables in winter without worrying about heating costs. The Energy Ministry said it joined hands with the Ministry of Agriculture, Food and Rural Affairs to recycle 370,000 tons of heated wastewater in a year.

The government said these businesses also should focus on the global market.

“It no longer can be an excuse to say that we’re not going to do this because the domestic market is small,” said Park. “By combining our superb construction technology with an energy storage system and management technology, we can create our own export model.”