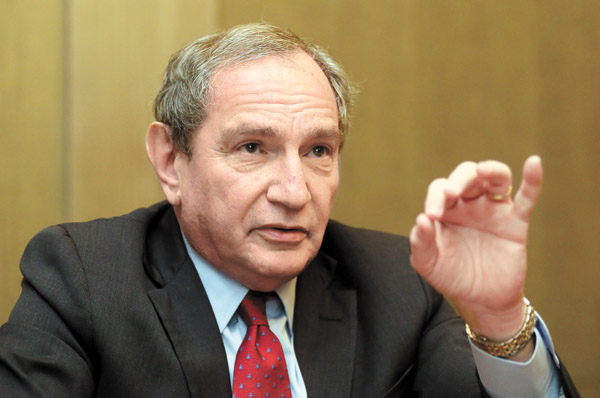 George Friedman is the CEO of the private intelligence corporation Stratfor. By Kim Seong-ryong


According to American political scientist and best-selling author George Friedman, Korea needs a relationship with the United States “as a third-party guarantor” to protect its sea lanes.

“South Korea is an island, a maritime country,” Friedman said in an interview with the JoongAng Ilbo on Oct. 13 in Seoul. “It has the highest export rate in the region. You are utterly dependent on sea lanes. You don’t have the resources to defend your global sea lanes.”

In a situation where Japan is unpredictable and relying too heavily on China is risky, he said, “You must have an ally. The most logical one is the United States.”

Friedman, the CEO of the private intelligence corporation Stratfor, was in Seoul to attend the three-day 2014 Social Enterprise World Forum, which kicked off on Oct. 14. This marks the first time the forum has been held in Asia, and Friedman was invited as a guest speaker.

The Hungarian-born Friedman founded the Texas-based Stratfor in 1996 and is a New York Times best-selling author of several books, including “The Next Decade” (2010), which forecasts the major challenges the American government will likely face with other nations over the next 10 years.

A. If the Chinese economy were healthy, why would the Chinese be buying real estate in New York? During Japan’s peak, they bought a great deal of real estate in Rockefeller Center [New York], Pebble Beach [California] and other things. There was a huge surge of capital flight out of Japan. And everyone said this is a signal of how powerful they are. Whereas, if you thought about it carefully, if the Japanese were healthy as portrayed in 1990, it would be irrational for any Japanese investors do be doing what they were doing, which is doing bad deals outside.

One of the things we see about China today is that it is refusing to invest [domestically] but is investing elsewhere, with Chinese factories moving to Latin America. When we say a collapse, we have to remember that Japan has remained the third-largest economy in the world. … It does not mean a collapse in the sense that it will plunge into nothingness. It means that it will change the way it behaves.

You argue that the Japanese government could be aggressive for various reasons. Do we have to be concerned about the resurgence of Japan?

Japan remains the most powerful, stable power in East Asia. It has chosen for the past 20 years not to play that role. But when you take a look at Japan, not just economically but militarily, it’s a very impressive country. It is now in the process, once again, of discussing Article 9 [of its pacifist Constitution]. It is slowing and, as it does, changing its behavior.

But to me, the most impressive thing is that after its failure in 1989, it has remained the world’s third-largest economy. … [The Japanese] have managed to maintain relatively full employment and internal debt instead of external. When you look at performance, we in the West like to call it the “lost generation.” I don’t know if it was lost, considering how badly it could have ended for Japan.

The Japanese are now extremely concerned about America’s willingness to guarantee sea lanes as the Japanese import all their raw materials. So long as the United States remains their major guarantor and the [U.S. Navy’s] Seventh Fleet remains the dominant naval force, the Japanese can be quite comfortable. But they can’t predict the manner in which China and the U.S. would direct over the next few years, so they’re shifting their stance a lot.

Then is it better to build a more favorable relationship with China and be wary of Japan?

Japan is your historical enemy. Japan is capable of guaranteeing your sea lanes and also isolating you. Historically, going back to the 15th century, this has been the Korean problem. Therefore, you have to inevitably depend on an outside power.

The problem is that the U.S. wants to approach all of these issues from a “balance of powers” standpoint. And what we want to do is play the role in such a way that they don’t threaten our interests, and it’s easy to play them. You assume you have choices. You can bet on China, but you have already made a huge bet on China. Your economy is oriented heavily toward China ­- how much more of a bet do you want to make on China?

You can make a bet on Japan, but you are more of a competitor with Japan than a partner. And historically, Japan is an unpredictable player in the long term. Therefore, you are left needing a relationship with the United States as a third-party guarantor. ...

But the problem is that you can’t increase your bet on China, and Japan is unpredictable. So your policy is precisely the policy that follows 1950.

How do you view the situation in the Middle East? Will it stabilize?

Iraq and Syria were invented countries. … Lebanon [another country that was also invented] collapsed in 1975 so that the central government no longer meant anything. But you had the regional groups with their own power setters and that counterbalanced everything.

Syria no longer exists. … Now what’s happened is that Iraq ceased to exist. … You had the clan warfare you had in Lebanon. Lebanon stabilized over a period of 15 years. This region will stabilize as well. The only thing the U.S. is interested in is that an international terrorist organization not be created.

We have an interest in ISIS [the Islamic State], but the country that really is responsible for this - because it has no choice - is Turkey. Turkey has an army of a million people. Its southern border is chaos. It has to come in. What it would like is that America come in. But we are not going to. In 2003 and 2008, we failed. … The United States decided to withdraw. The net result was the collapse of Iraq and Syria. The U.S. has refused to re-enter, except with airstrikes. Turkey faces two crises, first in the Black Sea with the Ukraine, and second to the south. It is the only viable power in the region, and therefore, the interesting thing right now is that Turkey is resisting its fate.

Three high-ranking North Koreans visited South Korea without prior notice earlier this month for the Incheon Asian Games, while Kim Jong-un was absent from the public eye. What do you think about this situation?

What’s out of the ordinary is the sudden visit, coupled with the machine-gun fire. There’s obviously some sort of power struggle going on inside the North. I think the power struggle is that Kim Jong-un, or the people close to him, understand that in a region that is this unstable, where Chinese commitment is that much of a question, where Russia’s future is very much uncertain and Japan is shifting its behavior, being completely static is dangerous.

The problem is they can’t figure out how to change that. … My guess is that the older generals don’t just want to do nothing. I don’t know what the kid is doing. Others are saying we should do something, so they came, and another faction opened machine-gun fire. This is an interesting time for South Korea to do absolutely nothing. … And you can’t decide the most fundamental question: Do you want the regime to fall? Because if the regime falls, now you are in West Germany’s position.

What is the best way for us? Just to wait?

If you can’t figure out what’s happening in North Korea, then you can’t figure out what to do. The issue here is: Will you now emerge from this power struggle with another 10 years of rigidity - which you could live with very nicely - or is it going to become dynamic, in which case you have very serious decisions to make, especially if dynamism undermines the regime. South Korea is not good at making fast decisions. It’s a long-term manager. … What can you do but wait, watch and remain alert?

Do you have any advice for the Park Geun-hye administration on foreign policy?

I would argue that you are both the most extraordinary and least-safe nation in the world.

You are extraordinary in that the social discipline you showed over the past 50 to 60 years is unbelievable. But you are sandwiched between China and Japan, and neither of those are safe. And I would argue that your relationship with the United States, which has been the foundation of everything you’ve done since 1950, remains your key foundation. And it’s frightening because the U.S. is a little crazy.