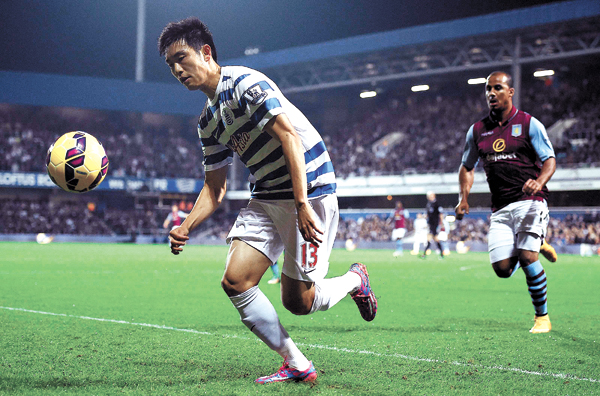 Left-back Yun Suk-young of Queens Park Rangers (QPR) is trying to secure his spot on the starting roster, after helping the team to a 2-0 win against Aston Villa at its home Loftus Road in London.

The 24-year-old landed on QPR’s starting eleven for the first time this season on Oct. 19 against Liverpool and played full time, after sitting out the first part of the season due to an ankle injury sustained over the summer. He repeated the task on Monday against Aston Villa and was also in charge of taking free kicks and corner kicks.

Yun was also active in attacking, even taking a shot on goal in the 20th minute.

Yun transferred to London-based QPR in 2013 and the club returned to the English Premier League this season. He was praised by QPR Manager Harry Redknapp and English media for his performance on Monday.

The defender spoke to the press after the match against Aston Villa.

Q. How was your condition today?

A. I used to have a backache, but it got a lot better as well as my ankles. I think I did better than when I played against Liverpool, and I felt stronger. I will get better, too.

How do you feel now?

I really wanted to win. I’m happy and I think I should do better in the next match.

You are playing against Chelsea on Nov. 2 and Manchester City on Nov. 11.

I know they are strong teams. It won’t be easy because they have many great players, but soccer is unpredictable. I think we can give it a shot.

You took free kicks, too.

I kept practicing them this season. In the last training, Manager Redknapp told me to kick in set piece plays. But we didn’t have many free kicks and corner kicks [today].

You’ve been criticized for poor crosses in the last round [against Liverpool] but they got much better this time.

It was because the ball bounced too much when I kicked the ball. I’m working really hard on it.

How does it make you feel now that all of the left-backs on the national team are injured?

I hope they get better soon and return to the national team. Now, I need to focus on my team and help them even more.