Royals force a Game 7 with a 10-0 shellacking

Royals force a Game 7 with a 10-0 shellacking 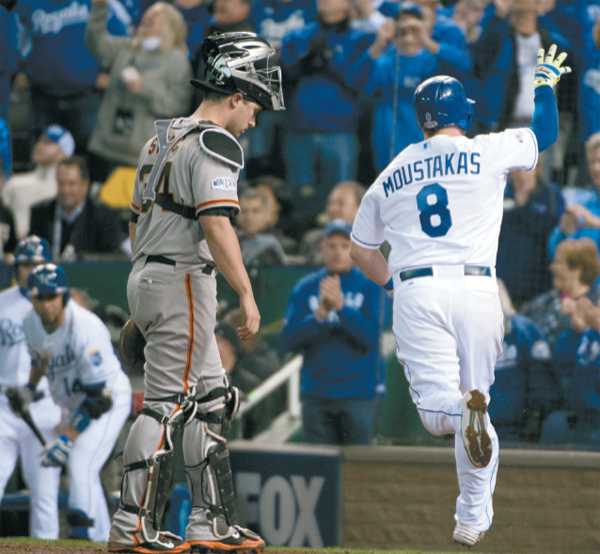 Lorenzo Cain looped a two-run single and Eric Hosmer chopped a two-run double over the shortstop in a seven-run second inning as the Kansas City Royals battered the San Francisco Giants 10-0 Tuesday night to force a decisive Game 7 in the World Series.

Jeremy Guthrie will start Wednesday night local time for Kansas City and Tim Hudson for San Francisco in a rematch of Game 3, won by Kansas City 3-2. The 39-year-old Hudson will become the oldest Game 7 starter in Series history.

Lurking is Madison Bumgarner, ready to pitch in relief after stifling the Royals on a total of one run in winning Games 1 and 5.

Home teams have won the last nine Game 7s in the World Series, and the Giants are 0-4 when the Series is pushed to a decisive game. Most recently, Barry Bonds and San Francisco lost Game 7 to the Angels in 2002.

The Royals chased Jake Peavy in the second. When Omar Infante doubled in the third, every Kansas City batter already had a hit.

Ventura made the one big pitch he needed to keep it a rout. After walking the bases loaded with one out in the third, he got Buster Posey to ground into a first-pitch double play.

There was a pregame moment of silence for Taveras, killed in a car accident Sunday in the Dominican Republic.

Shut out by Bumgarner in Game 5 at AT&T Park, and facing a 3-2 deficit, Kansas City hoped for a break to bust loose at Kauffman Stadium. The Royals certainly got one the only other time they hosted a Game 6 in the Series, when umpire Don Denkinger’s missed call in 1985 helped them rally past St. Louis for their lone crown.

This time, everything seemed to go Kansas City’s way. Hosmer & Co. had 14 hits after the sixth, and six players had doubled.

How much did things tilt in the Royals’ favor? Hosmer came up with two runners on base in the second, and hit what appeared to be a hard RBI single off Yusmeiro Petit.

But time had been called just before Petit released the ball, and the hit didn’t count. Plate umpire Jeff Kellogg patted Hosmer on the chest as if to say, “Better luck next time.”

And Hosmer did have better luck. He reached out, chopped a ball in front of the plate and it hopped over shortstop Brandon Crawford’s head, with Hosmer hustling and diving headfirst for a double that made it 6-0.

Before the game, the Giants and Royals both talked about how the infield in Kansas City was much harder than the dirt in San Francisco.

Mike Moustakas was able to ground an RBI double between first baseman Brandon Belt and the bag for a 1-0 lead in the second. But the dirt didn’t have any effect moments later when, with runners at second and third, Alcides Escobar hit a bouncer to Belt.

Belt ranged far off the base, looked to see if he had a play at home - the runner held - and then missed his tag on a diving Escobar. The misplay seemed to open the door for the Royals, and they charged through.

Cain walked in the first, hit a two-run single in the second and added an RBI double in the third. The speedy center fielder also made a fine running catch. AP