[Sponsored Report] Jobs from Shinhan get moms back to work

[Sponsored Report] Jobs from Shinhan get moms back to work 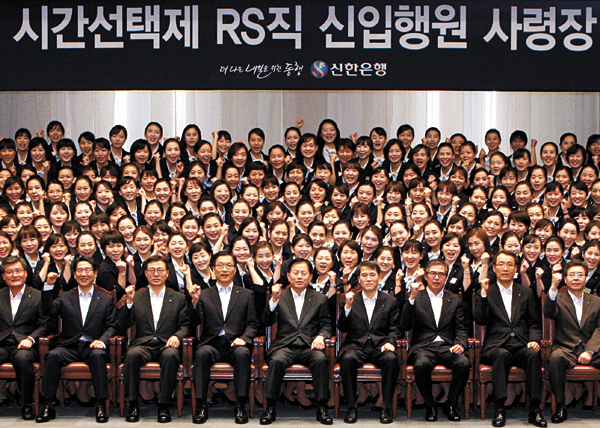 Shinhan Bank’s retail service workers and the bank’s president, Seo Jin-won, pose after the presentation ceremony for letters of appointment. Provided by the company

Shinhan Bank is leading the country’s movement to create jobs for those who had to quit their jobs because of the long working hours. Last year, the Ministry of Employment and Labor held a job fair for part-time workers at Coex, southern Seoul, on Nov. 26. Subsidiaries of major conglomerates in Korea such as Samsung, CJ, Lotte, and SK took part in the event, and Shinhan was the only participant from the banking industry.

The bank carefully planned its new part-time job system with the schedule of working moms in mind; it set the interview sessions and training sessions in the afternoon so moms can spend their mornings taking care of their children.

This was also an efficient decision for the bank because part-timers are put into work in the busiest hour for the bank. It is usually in the afternoon that bank windows flood with visitors who want to see RS workers to deposit or withdraw money, handle paperwork and pay utility bills.

The new RS worker system focuses on introducing women who had been away from the work force because of family issues. The enhanced client services create new value for not only the bank but also the community. More importantly, it is an opportunity for women who had to quit working because of childcare needs to return to their jobs without leaving their families behind.

Seo Jin-won, the bank president, paid special attention to the establishment of the RS worker system. Last June, he asked all executives and employees of the bank to attend the ceremony to present the letters of appointment for the first RS workers. He handed out the bank symbol of Shinhan to each RS workers not just to present a welcoming message but also indicate that Shinhan Bank will accompany the new start of the part-timers in their career.

“I want to give a round of applause to all of you here who are the most enthusiastic workers but also great mothers and housewives,” said Seo.