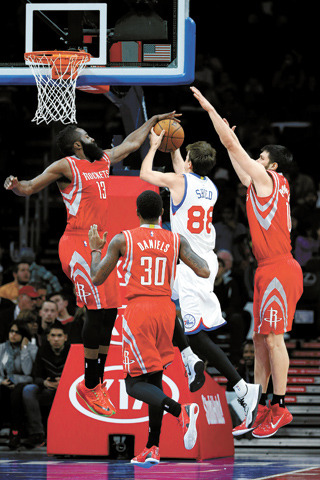 James Harden (13) of the Houston Rockets blocks a shot by Philadelphia’s Alexey Shved (88) during the first half of their game on Monday, local time, in Philadelphia. [AP/NEWSIS]

Play time is over, Houston. The Rockets are off to their best start since 1996 thanks in part to a lightweight schedule.

Up next, games against NBA finalists Miami and San Antonio that will serve as an early proving ground for a team with designs on playing deep into the postseason.

James Harden had 35 points and nine rebounds and Dwight Howard added 11 points and 14 rebounds to lead the Houston Rockets past the Philadelphia 76ers 104-93 on Monday night.

“We didn’t overlook these guys and think about Miami and San Antonio,’’ said Howard.

Trevor Ariza hit six 3-pointers and scored 24 points to help Houston improve to 4-0. The Rockets made 16 of 34 3-pointers and dominated the Sixers 47-31 on the boards.

Harden made his first 17 free throws, and the Rockets had assists on 27 of 32 field goals.

Ariza picked up in Philadelphia where he left off in March when he scored a career-high 40 points and spoiled Allen Iverson’s jersey retirement celebration night. Playing for Washington, Ariza made all six 3-point attempts in the first quarter for 24 points and finished 14 of 23 from the floor overall.

He was nearly as potent for Houston in the first. Without a hand in his face, Ariza buried open shots from the corner and the Sixers made no attempt to stick a defender on him. He scored 14 points and helped the Rockets race to a 13-point lead. Ariza was 5 of 6 from 3-point territory for 19 points by halftime and helped push the Rockets’ lead to 55-54.

The Sixers have put wins on the back burner this season and are focused more on player development.

Nerlens Noel is one of the projected cornerstones and he dazzled at times in the first half. Noel had four steals, stripping Howard on one possession, and five assists. But Noel, the 6-foot-11 rookie center, failed to grab a rebound until there was 2:40 left in the game.

Noel ended the third with a leaping, one-handed stuff of Harden’s two-handed dunk attempt that brought the crowd to its feet.

“I definitely brought the energy I’m capable of bringing every night,’’ Noel said.

He picked off a bounce pass near Houston’s 3-point line and soared home with a dunk early in the fourth to cut it to 80-76. The fun wouldn’t last long. Noel, who made a brief pit stop in the locker room, was on the bench for a chunk of the fourth and trainers worked on his right hand and wrist.

Despite their record, the Sixers haven’t been a total loss this season, playing competitive ball for the first three quarters in four games. They’ve hit a wall in the fourth when opponents pick up their pace and take over. This Sixers’ team simply is not talented or deep enough to pull off a win against a contender like Houston.

“Those guys, they’ve got a chance one day to be a good team,’’ said Howard.

With double-digits wins against the Lakers, Utah and Boston, the Rockets are 4-0 for the first time since they won their first six games of the 1996-97 season.

Harden’s third 3-pointer built a cushion late in the fourth and Isaiah Canaan followed with his own from the corner for a 93-84 lead. Canaan’s next 3 gave the Rockets a 10-point lead and they put away the pesky Sixers for good.

“I was thrilled we shot more free throws as a team than James Harden,’’ Sixers Coach Brett Brown said. AP