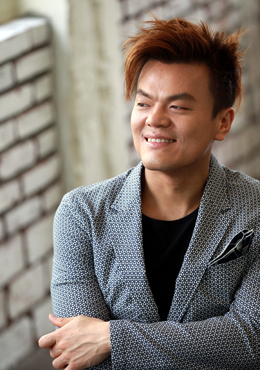 
Park Jin-young, the prolific singer-songwriter, producer and the head of JYP Entertainment, marked the 20th anniversary of his debut yesterday.

“I can’t believe 20 years have passed since my debut,” said Park during a press conference yesterday in Sinsa-dong, southern Seoul.

Having started out in 1994 when he was 22, the musician with an alternative look became a sensation in a music scene heavily dominated by pretty male singers.

But the versatile and experimental singer who could dance and write songs became successful with his own unique style and established JYP Entertainment in 2001 at the age of 29.

Since the launch of the entertainment company, Park has developed the careers of acts such as g.o.d., Rain, the Wonder Girls, Miss A, 2AM and 2PM.

According to JYP Entertainment, Park has composed 508 songs, 42 of which have topped major music shows and online music charts.

Park has also written songs for international singers. He composed “I Wish I Made That” for Will Smith, which was featured on the U.S. actor and rapper’s fourth album “Lost and Found” and was in the 10 top on Billboard’s music chart in 2004.

Along with SM Entertainment and YG Entertainment, JYP is considered one of the nation’s top three music agencies, but some industry insiders say it lags behind the other two as its musicians are not as successful.

“I spent about four years from 2004 debuting some of my singers in the United States. If I could have made the plan successful, that could have taken JYP to the next level but the plan didn’t work out. That is when [the success of] JYP fell,” said Park.

During the downtime, however, Park said he tried to implement different ideas into his business.

“Unlike SM and YG, JYP is quite dependent on me in terms of content production,” he said. “So I realized we needed a system instead of me.”

As part of these efforts, Park created a small music label under the entertainment company and established JYP Publishing three years ago. Park rents out musical instruments and studios to talented musicians through the publishing arm.

When asked about his dream for the future, the music mogul answered, “I wish I could sing and dance like a 20-something man even when I become 60.”

Park will hold a concert on Saturday at Olympic Hall, Bangyi-dong, in southeastern Seoul. The 20th anniversary concert is part of the Milk Music Live Station project, which is organized by Samsung Electronics. Park will perform in the second part of the show for about 90 minutes.