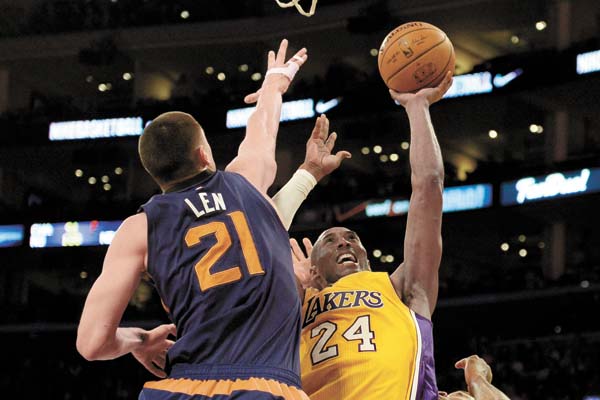 Kobe Bryant took over the Los Angeles Lakers offense and tried to take over the game, digging back into his famed history and carrying his undermanned team to the brink of its first victory.

The Phoenix Suns answered with all the balance and big shots that Kobe and the Lakers lacked.

Gerald Green scored 26 points off the bench, Markieff Morris had 23 points and 10 rebounds and the Suns overcame Bryant’s 39-point performance to keep the Lakers winless with a 112-106 victory on Tuesday night.

Isaiah Thomas scored 22 points in a reserve role for Phoenix, which survived a dicey fourth quarter to beat the Lakers for the second time in seven days. While the Suns respected the five-time NBA champion’s game-deciding ability, they proved better than the supporting cast currently assembled around Bryant.

“The difference down the stretch was the fact that we picked up our intensity,” said Green said. “Once we started seeing that they were making a run, then we were fighting for our lives.”

Bryant went 14 for 37 for the Lakers, who are off to their first 0-5 start since the 1957-58 Minneapolis Lakers lost their first seven games.

With a four-day break, coach Byron Scott gave 44 minutes to Bryant, who played the entire second half. In his fifth game back from injury, Bryant earned 12 free throws and launched 23 shots in the second half alone.

Scott sees frustration in his winless team, and Bryant hopes the youngsters and castoffs populating Los Angeles’ roster will follow his lead in effort, if not shot volume.

Meanwhile in Portland, Trail Blazers Coach Terry Stotts took it upon himself to address Damian Lillard’s night, saying, “You don’t have to ask what’s wrong with Damian anymore.’’

Lillard had 27 points and Portland regained last season’s form with a 101-82 victory over LeBron James and the Cleveland Cavaliers.

Lillard, who had been nursing an abdominal strain, collected 15 points by halftime after averaging just 13.7 points on 11-for-41 shooting in the first three games. The All-Star averaged 20.7 points last season.

“It’s the same game that I have been playing,’’ said Lillard. “The only difference was the shots went in.’’

The Cavaliers, playing the first of a three-game Western Conference road swing, hadn’t played since a 114-108 overtime victory at Chicago on Friday. They started fast but were doomed by poor-shooting nights from James (4 of 12) and Kyrie Irving (3 of 17).

“We have to understand what it takes to win. It’s going to be a long process. There’s been a lot of losing basketball around here for a few years,’’ James said.

Kevin Love, who grew up in Oregon and played at Lake Oswego High School south of Portland, had his third straight double-double for Cleveland (1-2) .

“It’s like building a car from scratch. I’ve done that before,’’ he said. “I hated the process, it got on my nerves. I sent it back to get repainted 100 times. But once it was completely finished I was excited about it.’’