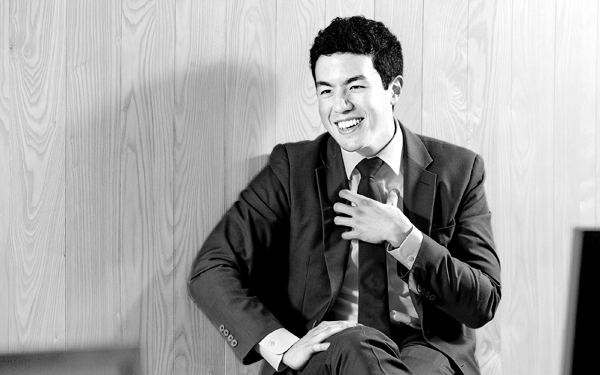 Steven Koh, a Korean-American who says he’s proud to have Korean roots, will start working next month as a trial attorney in the Office of International Affairs for the U.S. Department of Justice. By Ahn Sung-sik

Steven Koh’s family is anything but ordinary.

The former generation is no different: His grandfather earned his master’s and doctorate from Harvard Law School and was the former Korean representative to the United Nations.

After earning his own degrees at Harvard, Cambridge and Cornell, the younger Koh will start work next month as a trial attorney in the Office of International Affairs for the U.S. Department of Justice.

Perhaps it would be logical to assume that a person raised in such a successful family would be arrogant. But it’s apparent that Koh, a Korean-American, is humbled by his roots. In a recent interview with the JoongAng Ilbo, Koh saying he was “grateful” was as far as he would elaborate.

The following is an edited excerpt of the discussion:

Q. What was it like growing up in a family so passionate about education?

A. My father and mother have education in their blood. At our house, they created a culture of study and it was just normal. We [my siblings and I] came home and studied, and honestly, we loved to learn. I think of my father as my first teacher. When I was young, he taught me how to read and do math.

In my house, we also talked a lot about finding your own passion, and for me, it was international law. My brother is the chief of staff for the mayor of Boston, and my sister is a doctor. I think we all found something we love.

Do you have any personal views on Korean politics?

I heard a lot from my grandfather about it. He strongly believed in democracy and human rights. I know my grandfather was especially proud to be a Korean. He wanted Korea to have a strong democracy. As the eldest grandson in the family, I hope to make a contribution to that legacy of his in democracy, human rights and international law.

Has your grandmother had an influence on your life, too?

She taught me that Korea is a very special country, and I’ve known [the following] terms my whole life: the Joseon Dynasty, Goguryeo, Silla, Koryeo. She also taught me that what’s more important than achievement are what values you believe in - like serving others and having a sense of compassion. Those are the values she really cared about, and what our entire family cared about, too.

Do you know much about Korean history?

I like Korean history. For example, King Sejong the Great. I think he was a brilliant person and good to people. Obviously, the best example would be the alphabet. I’m very proud to be a Korean, and one of the many reasons is him. I’m also interested in the fact that Korea kept a very strong spirit during turbulent times in history, especially in the 20th century. I’ve read many history books and tried to be as knowledgeable as I can.

What plans do you have for the future?

I have eight publications right now, and I’m working on four more. I hope to keep publishing while I’m a prosecutor, and then go on to become a law professor.

I think it’s because my grandfather, father, uncle and aunts all worked both as professors and government officials. My hope is to have an academic contribution while being a part of the legal world.