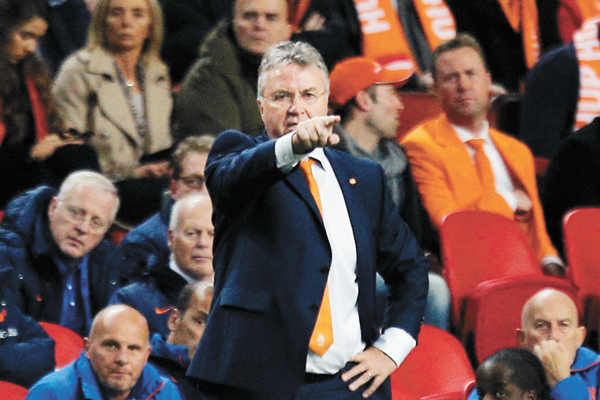 Netherlands Coach Guus Hiddink gives directions to his players during the Euro 2016 Group A qualifying match between the Netherlands and Latvia at ArenA stadium in Amsterdam on Sunday. [AP/NEWSIS]

The Netherlands outclassed Latvia in a morale-boosting 6-0 win Sunday in European qualifying that eased pressure on Coach Guus Hiddink after four defeats in his first five matches.

The Czech Republic went to the top of Group A with four wins out of four by beating Iceland 2-1 in Plzen thanks to a Pavel Kaderabek header in first-half injury time and a second-half own goal by Jon Dadi Bodvarsson. Iceland, which dropped to second after suffering its first defeat in qualifying, had taken an early lead through Ragnar Sigurdsson.

Arjen Robben and Klaas-Jan Huntelaar both scored twice while Robin van Persie and Jeffrey Bruma also found the net as the Dutch got their European Championship Group A qualifying campaign back on track. The Netherlands remained in third, but moved closer to second-placed Iceland.

After losing three of his first four matches in charge, Hiddink suggested last week that he would quit if the Netherlands failed to beat Latvia. His team also lost Wednesday to Mexico in a friendly to make it four defeats out of five matches since finishing third at the World Cup in Brazil under Louis van Gaal.

He never looked likely to lose his job. And Hiddink was safe by half time as his front three of Van Persie, Robben and Huntelaar gave him a comfortable 3-0 cushion at the break.

“It’s not important,’’ Hiddink said of his threat to quit. “What is important is we played well tonight in a crucial match.’’

Van Persie opened the scoring, rising to head home a Robben cross in just the sixth minute. Robben - the Netherlands’ most dangerous player - doubled the lead in the 35th when he sent a trademark curling left-foot shot over goalkeeper Aleksandrs Kolinko despite being surrounded by four Latvia defenders.

Huntelaar made it three in the 42nd when he sprinted to the near post to slide in a low cross from the left by Ibrahim Afellay.

Van Persie admitted the poor string of results had been getting to him.

“There was a lot of pressure from all sides,’’ he said. “I was more nervous than usual. We’re only human.’’

Latvia defended better in the second half, but eventually crumbled as the Netherlands poured forward and scored three times in the last 12 minutes.

Defender Jeffrey Bruma scored his first international goal when he turned in a corner that had been flicked on by Van Persie.

Robben grabbed his second with another left-foot shot and Huntelaar doubled his tally in the 89th, turning smartly and drilling a low shot under Kolinko’s outstretched hand.

Turkey recorded its first win in Group A by beating Kazakhstan 3-1 in Istanbul. The defeat lifted Turkey off the bottom of the group into fourth place, behind the Dutch.

Burak Yilmaz scored twice in three minutes in the first half and Serdar Aziz made it 3-0 in the 83rd minute before Samat Smakov scored a consolation goal for Kazakhstan from the penalty spot.

In bad news for Manchester United, midfielder Daley Blind limped off in just the 20th minute against Latvia after injuring his knee and Hiddink said it looks serious. AP