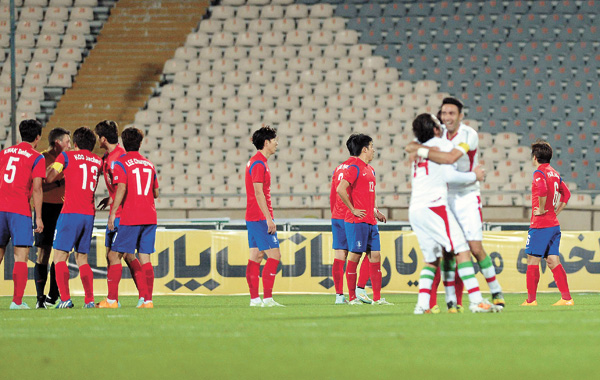 Substitute Sardar Azmoun netted a controversial goal in the 82nd minute to secure Iran’s 1-0 win. Korean players turned to the referee, insisting that Azmoun charged goalkeeper Kim Jin-hyeon, but the official did not accept their complaint.

Korea pressured Iran from the beginning and made several close attempts on goal. Lee Chung-yong made a breakthrough on the left and crossed to Son Heung-min in the center who then headed the ball, but it was blocked by defender Ehsan Hajsafi at the edge of the goal.

Son was a threat for the rest of the first half, firing two more midrange efforts in the 22nd and 39th, which were stopped by goalkeeper Alireza Haghighi.

Iran also had a close chance in the 35th. Veteran national team midfielder Javad Nekounam received a cross from Reza Ghoochannejhad and kicked the ball toward the net, but Kim made a nice save. But Andranik Teymourian fired the rebound back, hitting the right side of the net.

Striker Lee Keun-ho tried hard to create chances but only took two shots during the match. He was often isolated and challenged by Iranian defenders, and was replaced with Park Chu-young in the 73th.

The balance was broken when Nekounam’s free kick in the 82nd hit both goalposts and bounced back to Azmoun, who was unmarked. He headed the ball in and subsequently crashed into Kim, at which point the Koreans demanded that the referee call a foul.

“In the 82nd minute, both the main referee and linesman [made a bad call] and it decided the game,” national team Manager Uli Stielike said after the match.

Though the decision drew criticism in Korea, some experts insist it was a fair goal.

When Korea JoongAng Daily affiliate Ilgan Sports talked to three Korean international referees after the match, all three said Azmoun did not charge the keeper. Their names were not disclosed because they are not supposed to comment on matches.

“When determining goalkeeper charging, you should see who approached the ball first,” said a referee. “The Iranian player was closer to the ball than the goalkeeper.”

“As the ball hit both goalposts, neither Kim Jin-hyeon nor Azmoun had possession of the ball, and they both had a fair chance to take the ball,” said another. “If Kim had caught the ball, it is goalkeeper charging, but he did not have full control of the ball.”

“There is no such area called the ‘goalkeeper protection area,’” said the third referee. “Goalies can only grab the ball in the penalty box, and everything else is the same for the other players on the field.”

South Korea’s record against Iran is 9-12-7, and they will likely face the team again in the Asian Cup in January in Australia. South Korea is in Group A and is expected to play Iran in Group C in the semifinal or final.