Alums from London meet in Seoul

Alums from London meet in Seoul 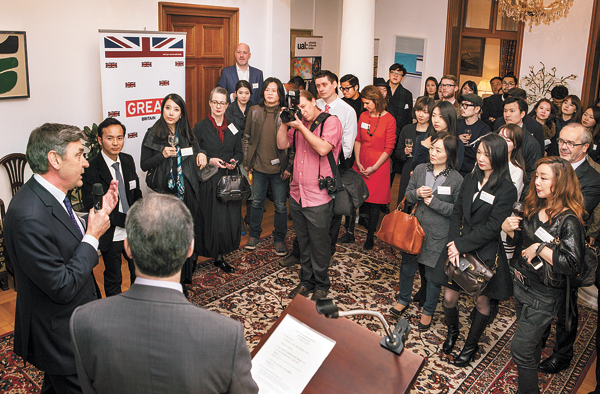 Alumni of the University of the Arts London (UAL) have a reunion Tuesday at the British Embassy in Seoul. Nigel Carrington, vice-chancellor of UAL, gave a welcoming speech. By Park Sang-moon

Alumni of the University of the Arts London (UAL), the biggest art and design university in Europe, gathered on Tuesday at the British Embassy in Seoul to cement their professional networks and share after-graduation career advice.

Carrington said one of UAL’s strengths is its multicultural environment. Forty-nine percent of its students are from outside Britain, and the large international contingent, which he said UAL prides itself on, spurs a lot of new ideas. Koreans account for 6 percent of its student population, he said.

“We have a very strong connection with Korea,” Carrington said. “We have been teaching and researching with Korean students for a long time - 15 or 20 years.”

Established in 2004, UAL has earned an international reputation in art, design, fashion, communications and performing arts.

Carrington said UAL doesn’t simply teach how to make beautiful things, but shows how design can contribute to solving social problems, which Korea has experienced as well, he said.

He referred to Salt Way, known as Sogeum-gil, a 1.7-kilometer(1-mile)-long crime-infested back alley in Yeomni-dong, Mapo District, central Seoul. The area was rejuvenated after Seoul Mayor Park Won-soon renovated the area in 2012 by painting the walls with bright colors and installing lights.

According to a poll conducted by the Korean Institute of Criminology, 372 Yeomni-dong residents found that feelings of insecurity had decreased by 9.1 percent in about six months after Salt Way was created.

Park was inspired when he visited London in 2010 and learned that UAL’s Design Against Crime project succeeded in reducing bike thefts by renovating bike stands in London.

Shin Yong-kyun is a graduate of Central Saint Martins with a master’s degree in arts in fashion. After graduating in 2012, he went on “Top Designer,” a reality competition broadcast on MBC Everyone. In 2013, Shin earned first place.

Shin recalls his college emphasizing the process when it came to design rather than the result. The process, in other words, was researching. In college, he spent a lot of time at libraries at the school or in the city.

He said he’s disappointed that there aren’t many libraries in Korea that preserve historic materials that design students can use in their research.

“In London, resources abound if you go to libraries,” he recalled. “They were like treasure troves.”

Shin gave a tip to other students who want to broaden their spectrum of fashion knowledge.

“Many people rely on the Internet to research these days,” he said. “But information on the Internet only tells you what you’ve asked for in the first place,” he said. “In a library, there is a much broader range of materials. For instance, if you are looking for modern fashion, you will have to stumble upon older fashion as well, and that’s how you learn.”

Lawrence Zeegen, dean of the School of Design at London College of Communication, was among the professors who made a visit to Seoul to see the UAL alums.

As for the British job market for design students, grades are not critical factors. Instead, portfolios and personality matter the most, Zeegen said. “Positive, forward-looking and enthusiastic” personalities are required, he said.

Scott Wightman, the British ambassador to Seoul, said Korea and the United Kingdom have great potential to work together to make a more creative economy, one of President Park Geun-hye’s economic ambitions. And the alumni of UAL can play a pivotal role.

“We want to help you as alumni work and network together,” said Wightman.