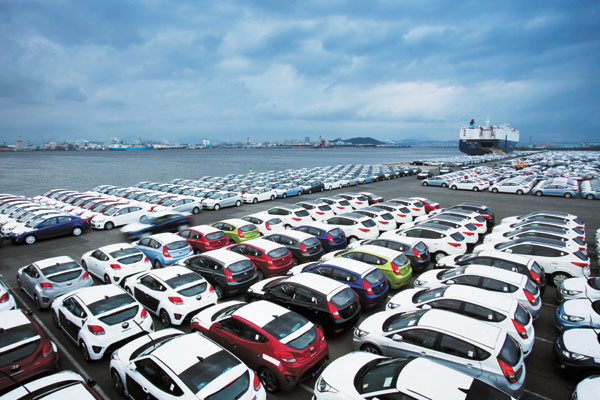 Vehicles of Hyundai Motor and Kia Motors are lined up at a dock for export. [JoongAng Ilbo]

In a strategic meeting to expand exports organized by Hyundai Motor Group Chairman Chung Mong-koo, the company forecast it would exceed its 2014 goal of selling 7.86 million cars worldwide despite the weak Japanese yen, an unstable foreign exchange rate and a slumping domestic economy.

“The market situation in the future will not be easy for us,” Chung said in the meeting. “Everyone says the industry is in crisis, but I think our competitiveness in the market will be proven if we can perform well in such a situation.”

The group said the eight-million milestone will be achieved 47 years after the group was established in 1967. The two companies sold 7.56 million cars last year.

By comparison, Japanese rival Toyota was established in 1937 and sold 8 million units for the first time in 2006. It became the best-selling brand in the world two years later with sales of 8.97 million to beat out General Motors (GM). Both Toyota and GM are expected to sell more than 10 million cars this year.

Hyundai and Kia have sold 1,421,650 cars in China this year through October, a 10.5 percent increase from a year ago. They expect to sell more than 1.7 million units by the end of the year.

The two also overachieved in India, thanks to small cars like the i20 hatchback and Xcent sedan, marking an 8 percent sales increase from a year ago.

Hyundai and Kia also were two of the most popular brands in Brazil. The auto group said overall sales there by other automakers declined an average of 8.6 percent this year, but sales for Hyundai and Kia increased 7.2 percent.

It added that the marketing strategy of being official vehicle sponsors of the 2014 Brazil World Cup in June worked out well.

The auto group said its strong worldwide performance will be a positive influence on the nation’s economy as it helps many related industries, including auto parts manufacturers, to expand market share. It said exports of auto parts this year through September were a record $19.9 billion, up 3.73 from a year ago.

“The quality competitiveness of auto parts has consistently improved, while the nation’s car exports have been increasing in the past few years,” said the group.

Hyundai and Kia have not had impressive years in the United States and Europe, but they expect to bounce back with new models like Hyundai’s second-generation Genesis, and Tucson ix and Santa Fe SUVs, as well as Kia’s new Carnival van.

Kia Motors said it is considering building a factory in Mexico. “Hyundai’s factory in Alabama and Kia’s in Georgia are fully operating, but we still need to produce more cars for North American region,” the company said.