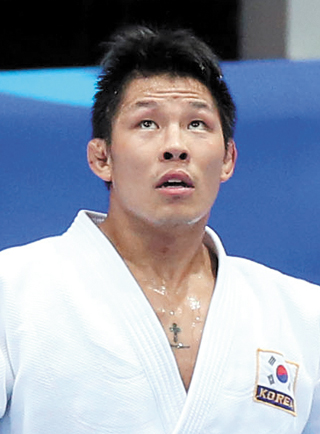 Stars Kim Jae-bum, 29, and Wang Ki-chun, 26, will meet in a showdown today for the first time in seven years at the Judo Grand Prix Jeju.

While Kim was solidifying his position as top judoka in the under-81 kilograms (under-179 pounds) class, Wang moved up from the under-73 kilogram class. Today’s match will be their match since Wang changed his class.

Kim is recognized as a world-class judoka. He achieved the grand slam, which includes wins in the Olympic Games, World Championships, Asian Games and Asian Judo Championships, by winning gold at the 2012 Olympics in London.

He won two gold medals - individual and team - at the 2014 Incheon Asian Games and added another at the National Sports Festival in October in Jeju. 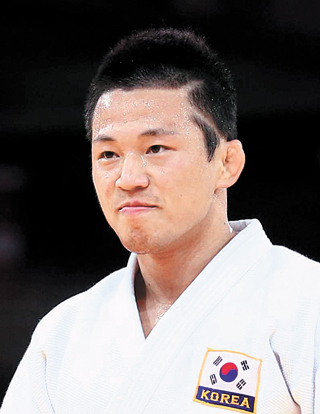 Kim is known for his stamina and competitive spirit, and is called “Mr. Five Minutes” because he keeps attacking opponents relentlessly for the full length of the match.

“Kim never alters his style, whomever he faces in a match,” says Lee Gyeong-geun, manager of Kim’s team, Korea Racing Authority. “His form isn’t typical, but he has stayed on top. It won’t be any different this time, as well.”

But he can’t be looking forward to Wang, whom he competed against in the under-73 kilograms class seven years ago. In the match that determined the Korean national team for the 2007 World Championships in Paris, the rookie Wang defeated Kim, who later moved up to the under-81 kilograms class the same year.

Wang is considered a judo genius, who is good at throwing by grabbing both collars of the uniform. To do so, Wang deceives opponent by pretending he is pushing away and then suddenly narrows the distance with his opponent. It also is the skill that eliminated Kim seven years ago. Wang’s another ace move is the foot sweep, which will bring down opponents who shift their weigh to prevent being thrown.

It hasn’t been easy for Wang to adapt to the new class, but he won the tournament that determines national team members on Nov. 5.

“Wang has great skills that are good enough to end the match all of sudden,” said manager Jang Mun-gyeong of Wang’s team, Yangju City Hall. “Kim has nice defense, but Wang is skilled enough to break it.”

They were on track to meet in the National Sports Festival, but Wang suffered a hamstring injury in the quarterfinal. Kim also did not attend the national team selection tournament earlier this month.

“I think it is time to face Wang,” said Kim. “But other strong foreign players are competing in the Grand Prix as well, and I’m trying to prepare for all of them.”

“The match with Kim won’t end by throw because we know each other well,” said Wang. “It will be an intense fight to win more yuko [advantage points] and I will try to finish the match with unexpected skills.”

The three-day Grand Prix, which kicked off on Thursday, is a major international tournament attracting more than 500 judokas from 53 countries. A total of 56 Korean male and female judokas are competing.