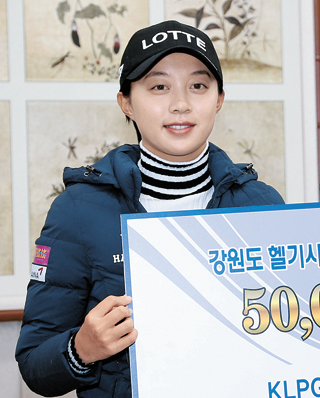 KLPGA money leader Kim Hyo-joo, who is officially advancing to the LPGA, signed a five-year contract with her main sponsor Lotte Group for 6.5 billion won ($5.84 million) at a ceremony on Tuesday at the Lotte Hotel in central Seoul.

She will receive 1.3 billion won annually, making her the second-highest paid golfer in Korea after Park Se-ri, who signed a contract with CJ in 2003 and makes 2 billion won per year.

She will also get an extra 1 billion won if she achieves an LPGA career grand slam, winning all four major tournaments of the LPGA during the course of her career.

She has won the 2014 LPGA Evian Championship, the tour’s most recent major tournament, in September. Kim also receives 300 million won if she becomes the money leader in the LPGA or climbs to the top of world rankings.

The golfer became a sensation when she won 18 amateur and three professional tournaments before she made her professional debut in 2012. The same year, she signed with Lotte for 500 million won annually, the most of any rookie of the year.

“I never thought about making money and only played golf,” Kim said Tuesday at the signing event. “I have signed a contract for an unimaginable amount [of money] and I still can’t believe it. It is very motivating.”