On brink of ignominy, Sixers happy to be 1-17

On brink of ignominy, Sixers happy to be 1-17 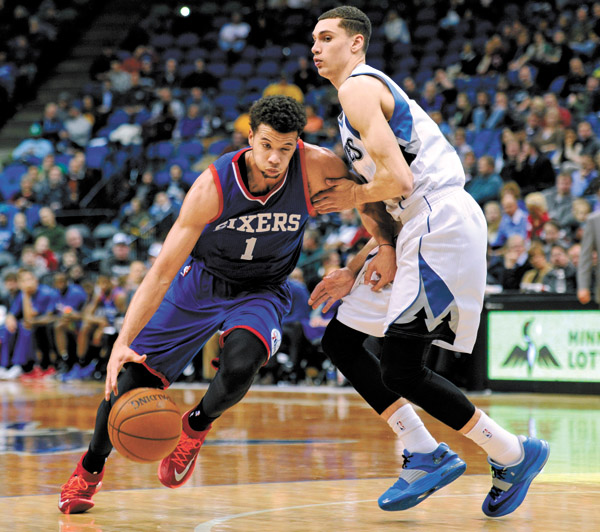 76ers guard Michael Carter-Williams drives against the Timberwolves’ Zach LaVine during a game on Wednesday, local time, in Minnesota. [AP/NEWSIS]

The Philadelphia 76ers were 16 seconds into their game against the Minnesota Timberwolves and Henry Sims was stepping to the free throw line when referee Zach Zarba blew his whistle and stopped the game.

Turns out the Sixers were going in the wrong direction, just like they have been all season long. The foul was wiped away, the teams switched sides and the game was restarted and the Sixers got pointed the right way.

The 76ers avoided tying the record for the worst start to a season in NBA history, ending their 0-17 skid with an 85-77 victory over the Timberwolves on Wednesday night.

A loss to the Timberwolves would have tied the 2009-10 New Jersey Nets for the worst start to a season in league history at 0-18.

Many of these Sixers, including point guard Michael Carter-Williams and Coach Brett Brown, were part of the team that lost 26 straight games last season, which tied the record for consecutive losses.

“For me personally, I think it’s a big relief off my chest,’’ said Carter-Williams. “And the same is true for the rest of the guys now that we got a win.’’

Particularly the first one for a team with the youngest roster in league history.

“We feel like this validates the work they’ve put in,’’ said Brown. “I just have a tremendous amount of respect for the fact that they never once quit on themselves, short-circuited a practice, and they were rewarded tonight.’’

Carter-Williams had 20 points, nine rebounds and nine assists and Robert Covington added 17 points in a game between two of the worst teams in the league.

The Sixers shot just 39 percent against the poorest defense in the NBA, turned the ball over 19 times and scored only nine points in the second quarter.

Gorgui Dieng had 15 points and 16 rebounds for the Timberwolves. But Minnesota shot just 35.7 percent and turned the ball over 19 times to lose for the 11th time in 13 games.

“That’s what makes it bad,’’ said Wolves forward Corey Brewer. “They play that bad and we still lose? We have to look at ourselves, man. It’s tough. We can’t lose that game, period.’’

But the Timberwolves were ripe for the taking without injured starters Ricky Rubio, Kevin Martin and Nikola Pekovic and playing their fourth game in six nights.

The teams combined for 66 points, 55 missed shots and 25 turnovers in the first two quarters. The Sixers led by 10 points after the first quarter - their first double-digit, first-quarter lead of the season - and 12 in the second quarter before the Wolves got going.

They closed the period on a 13-1 run to take a 34-32 lead into the break, but both teams spent most of the night clanking shots, fumbling passes and squandering opportunities.

Carter-Williams hit nine of 20 shots and Covington, a call-up from the D-League, hit two big 3-pointers in the fourth quarter to give the Sixers a 69-64 lead.

Mo Williams capped an 11-2 spurt with a 3-pointer that gave the Wolves a 75-73 lead with 2:18 to play. But K.J. McDaniels, who air-balled his first two 3-pointers of the night, came right back with a 3 of his own and Covington’s third 3 of the quarter with 1:15 left sealed it.