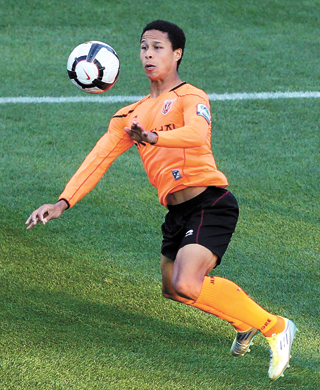 The K League’s only Korean-African-American footballer has achieved a long-held dream by making it onto the national football team.

Forward Kang Su-il, 27, of the Pohang Steelers, was born in Korea to an African-American father who was in the U.S. army and a Korean mother. He was picked to play in a weeklong training with the national team starting Dec. 15 on Jeju Island, the Korea Football Association said Thursday.

In an interview in 2008, Kang listed “national representative” as his ultimate goal, and it took six years for him to make his dream come true. He is the country’s second mixed-race footballer to join the national team, after British-Korean Jang Dae-il who played in the 1998 FIFA World Cup in France.

“I have dreamed of this moment for so long,” Kang said after the announcement. “My mom said ‘thank you’ when I told her the news.”

Kang began his professional career in 2007, training with Incheon United, and moved to Jeju United in 2011. But his performance improved noticeably this season after he was loaned to Pohang under Manager Hwang Sun-hong, who was once considered to be among the best strikers in Asia. Kang scored seven goals in 33 matches with the Steelers, the best performance of his career.

“Physical condition is important as well,” commented Hwang, “but most of all, it seems he desperately wants to make goals given that he often scores in difficult situations.”

Kang is also known for his kindness. In the K League’s All Star match in July, he celebrated his goal by revealing his undershirt, on which he had written phrases encouraging unity among multiethnic members of society. He also volunteers with the group Amitie, a French word that means friendship, along with other former and current members of Incheon United. Amitie organized a charity football match between children’s teams on Monday.

Living in Korea as a half-Korean wasn’t easy for Kang, but it was also the reason he started playing football. Kang says he was a troublemaker in elementary school and one day he went to Dongducheon Elementary School for a fight. The football coach there saw him and recommended he start playing football.

Kang’s mother did everything to support him. She made a living by taking care of ill senior citizens and working as a cook for Kang’s football team. During Kang’s first year at Sangji University, she couldn’t continue to work because of a back injury. So Kang chose to join Incheon United so he could make money to help her. After he was accepted into the club as a trainee, he gave all of his salary - a million won a month (about $900) - to his mother.

Although he will wear a uniform with the national flag for the first time, it doesn’t mean that Kang will be able to play in the Asian Cup in Australia in January. Strikers such as Park Chu-young and Lee Keun-ho are not attending the training camp because they are busy with their clubs in Europe and the Middle East, but they could still be on the final roster.

“I’m going to look at it as a challenge just like I did when I was first tested at Incheon United,” Kang said. “And I want to be a sensation that will startle the world this time.”