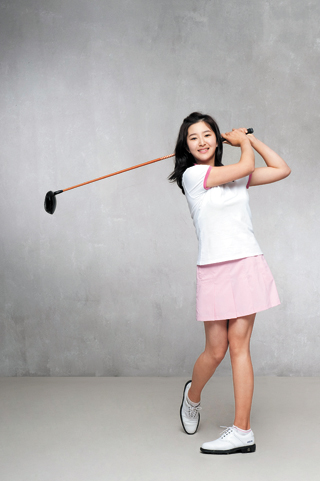 Among the newly qualified is Yang Ja-ryeong, or Julie Yang, the former golf prodigy featured in the JoongAng Ilbo in 2005.

The 19-year-old was born in Seoul in 1995, but her family relocated more than a dozen times all over the world in golf-related moves.

In 2002, she moved to Thailand, where she went to elementary school. It was then on to Phoenix, Arizona, before returning to Seoul for middle school. She spent a couple of years attending high school in Scotland, then graduated from Kwangdong High School in Namyangju, Gyeonggi.

She now lives in Oklahoma and studies finance at Oklahoma State University.

While Yang wandered the world, one of her constants was golf. And the golf nomad is on the move again: onto the LPGA.

She finished the Qualifying School tied for 18th at 4-under 356. Of 154 participants, only the top 20 win exemptions for next year, and Yang needed a birdie on the final hole to join that elite group.

In the first half of the last round on Sunday, she bogeyed two holes and double-bogeyed another. But she nailed five birdies on the back nine.

“It was really difficult to prepare for final exams while playing at Q-School,” said Yang. “I thank everyone who helped me get here.

“I always felt jealous of professional players like Lydia Ko, Kim Hyo-joo and Baek Kyu-jung, but now I think I’m lucky because I have experienced college life before joining the professional tour.”

Yang began playing golf when she was only 6 years old, and it took just a year for her to win a junior tournament. She also attracted the attention of golf fans when she hit a 242-yard tee shot at the ripe age of 9. Yang seemed unbeatable in junior amateur tournaments.

But it didn’t always go smoothly. Yang soon hit a slump while she was in high school. While other golfers her age were in intensive training and winning hundreds of millions of won, she chose to stay in school and play golf at the same time.

Yang did not quit. She kept playing after entering Oklahoma State University and won the National Collegiate Athletic Association SMU Invitational in 2013. In 2014, she was named the Big 12 Player of the Year.

She attributes her success to her parents, who supported her all around the world.

Her father, Yang Gil-su, 53, and mother, Kim Bun-ja, 50, drove their daughter home from Daytona Beach, where the Qualifying School was held, back to Oklahoma. The trip took about 20 hours, but that pales in comparison with the family’s nomadic history.

“We moved 17 times, to Pattaya and Rayong [Thailand]; Phoenix [United States]; Namyangju, Guri and Incheon [Korea]; Scotland; and Dallas and Oklahoma [United States],” said Yang’s father. “The mother of [ancient Chinese philosopher] Mencius moved three times for him, but we did it 17 times.”

He also mentioned Yang’s older sister, Ja-gyeong, who is working as a lawyer in London after graduating from Oxford Law School.

“I could pay as much attention to Ja-gyeong and I appreciate that she grew up so well,” said Yang. “I just hope Ja-ryeong does well in the LPGA and makes those who helped her happy.”

Including Yang, a total of seven Koreans will join the LPGA Tour for the first time, including Jang Ha-na, Kim Sei-young, Kim Soo-bin and Park Ju-young - who all passed the Q-School - and Kim Hyo-joo and Baek Kyu-jung, who were already seeded.