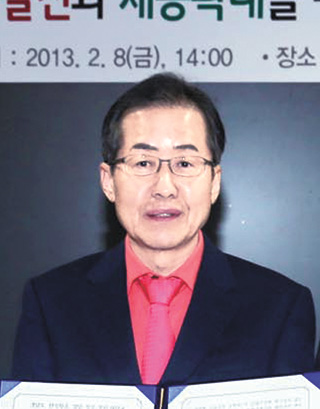 Goalkeeper Choi Bong-jin just graduated from Chung Ang University and joined Gyeongnam FC, where he has yet to play a game. But he may soon lose his job.

The team’s owner, Hong Joon-pyo, who is also South Gyeongsang governor, said the club could be disbanded depending on the result of an inspection that will be carried out because the team was relegated at the end of last season to the second-tier K League Challenge.

Local politicians’ involvement in the world of football ownership has become a major issue in the domestic K League.

Seongnam Mayor Lee Jae-myung, who owns Seongnam FC, was given a warning by the Korea Football Association (KFA) last week for claiming that referees made bad calls in Seongnam games last season, when the team was nearly relegated.

The South Gyeongsang Provincial Office is about to start an inspection of Gyeongnam FC to decide whether the team will be shut down for underperforming despite having sufficient monetary support from the local government.

Hong said in a meeting of provincial officials on Monday that Gyeongnam FC had a disappointing season even though it had a large budget.

Hong posted on his social network service on Monday saying, “Nexen Tire gives 4 billion won [$3.6 million] of sponsorship to Nexen Heroes, but we are not getting a tenth of what they achieve when we are spending 13 billion won on Gyeongnam FC. How can we call it a professional football team?”

It got worse after the team did not sign any new players in the 2015 K League Draft event on Tuesday at Seoul World Cup Stadium. Only director Bae Yeong-jae and goalkeeper Choi attended the event while other teams sent coaching staff and scouters.

“Promotion and relegation are a part of football,” said Stielike. “I’m sorry that politics is reflected in sports, more than players or the team.”

Daejeon Citizens Manager Cho Jin-ho said, “Soccer will decline with political intervention regardless of whether the team is in the first-tier or second-tier league. I hope owners, mayors and governors work for the good of the team.”

One solution suggested by fans and experts was cooperatives, such as Spanish club FC Barcelona where the president is elected by “socios,” or individual supporters.

There are nearly 200,000 socios, and anyone can become a socio of the club by paying 150 euros ($187). Anyone older than 18 that has been a socio for a year can join the board of directors and cast a vote in the presidential election, which occurs every six years.

There could be also be an institutional solution. In Germany, teams can join the first- and second-tier leagues only if at least 51 of their stocks are owned by individuals. Bayer Leverkusen, where Son Heung-min plays, was started by pharmaceutical company Bayer, but it accepted the regulation in order to join the Bundesliga.