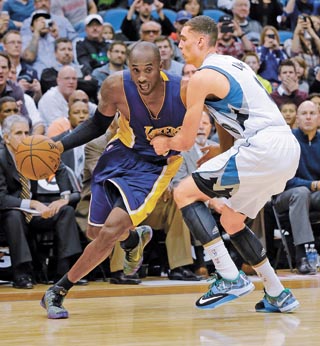 Kobe Bryant passed Michael Jordan for third place on the NBA scoring list and had 10 points in the final five minutes to lead the Los Angeles Lakers to a 100-94 victory over the Minnesota Timberwolves on Sunday night.

Bryant needed nine points to move past Jordan and, after missing four of his first five shots, he knocked down a pair of free throws with 5:24 to play in the first half to join Kareem Abdul-Jabbar and Karl Malone on the NBA’s career scoring podium.

Bryant finished with 26 points on 7-for-20 shooting and hit a 3-pointer with just over a minute to play that helped seal the victory.

Shabazz Muhammad had 28 points and nine rebounds for the Timberwolves.

The Timberwolves stopped the game and owner Glen Taylor presented Bryant with the game ball, but what made the night even sweeter was Bryant’s dagger with the shot clock winding down and Andrew Wiggins - Minnesota’s 19-year-old rookie and the No. 1 overall draft pick - right in his face. It gave the Lakers a 97-94 lead with 1:02 to play, and the Lakers closed it out at the line.

Bryant has spent the past 18 years measuring himself against, and being compared to, the man widely considered the best to ever play the game. Jordan shot a higher field goal percentage, won six titles to the five that Bryant has now and climbed past Wilt Chamberlain into third on the list in 1,039 games to Bryant’s 1,269.

But in terms of competitiveness, tenacity and sheer will, Bryant is about as close as it gets to Jordan.

He reached the milestone in Minneapolis, the place the Lakers called home for their first 12 seasons until moving to Los Angeles in 1960. As usual, there were purple-and-gold clad fans all over the Target Center, and they gave Bryant a rousing standing ovation when he knocked down the two free throws just past the midpoint of the second quarter to give him 32,293 career points.

He exchanged hugs with teammates and several Timberwolves, a few of whom were just 1 year old when Bryant entered the league straight out of high school in 1996.

“I congratulate Kobe on reaching this milestone,’’ said Jordan, the owner of the Charlotte Hornets, in a statement. “He’s obviously a great player, with a strong work ethic and has an equally strong passion for the game of basketball. I’ve enjoyed watching his game evolve over the years, and I look forward to seeing what he accomplishes next.’’

Missing Ricky Rubio (ankle), Nikola Pekovic (foot) and Kevin Martin (wrist), the young Wolves had designs on spoiling Bryant’s historic night when they trimmed a 10-point deficit to 84-81 with four minutes to play.