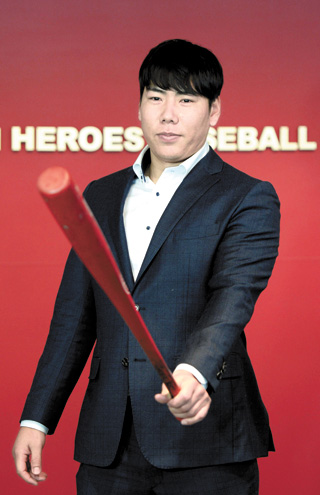 Kang Jung-ho of the Nexen Heroes poses at a press conference on Sunday at Mokdong Baseball Stadium. [NEWSIS]

Kang Jung-ho of the Nexen Heroes is set to become the first Korean shortstop to make the move to Major League Baseball after the team on Saturday accepted an offer from a major league team for $5 million.

“I could not believe that I was really going [to the MLB] until we heard the offer,” Kang said at a press conference on Sunday at Mokdong Baseball Stadium. “I also want to know which team offered the deal, and I think we are going to be able to know by Monday or Tuesday.”

It has not been revealed which team made the bid, but an official with Nexen who asked to remain anonymous told the Korea JoongAng Daily that it might be the Minnesota Twins.

The MLB team that offered the $5,002,015 has the exclusive rights to negotiate Kang’s contract over the next 30 days.

With the MLB team unknown, there is still a possibility that Kang could be playing in a new position.

“If I have to change my position, I would prefer third baseman to second baseman,” Kang said. “And I still want to play as a shortstop and post a batting average of at least .26 to .27 with 15 homers.

“I also want to bat against the best setup man, Aroldis Chapman of the Cincinnati Reds.”

Nexen, which posted Kang via the Korea Baseball Organization on Dec. 15, was notified by the MLB of the result on Saturday. The team was given a week to make its decision, but quickly accepted the bid on Saturday.

“We planned to think it over during the weekend at first,” said a Nexen Heroes official. “But instead we decided to accept it right away to make Kang more comfortable.”

The $5 million bid is lower than the team expected given that U.S. news agencies estimated bids would go up to $15 million.

But Nexen was focused instead on the meaning behind Kang’s posting.

“We thought Kang making his way to the MLB would be meaningful because he is the country’s first shortstop to knock on the door of the MLB,” the official explained.

The $5 million bid is the third-largest ever offered for an Asian infielder. Ichiro Suzuki brought the Orix BlueWave more than $13 million when he moved to the Seattle Mariners in 2000, and Chiba Lotte Marines received $5.3 million when Tsuyoshi Nishioka went to the Twins in 2010.

He was also selected as MVP of the second round of the postseason, leading Nexen to its first Korean Series.