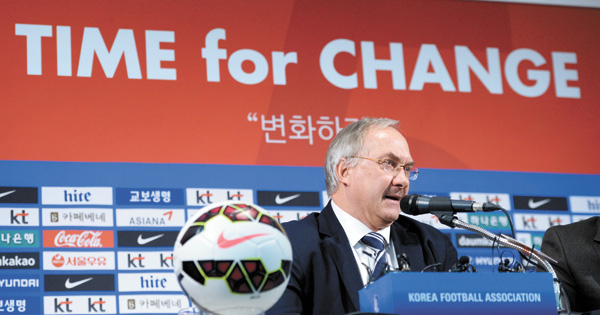 Uli Stielike, the national football team manager, announces the 23-man roster for January’s Asian Cup at a conference on Monday at the headquarters of the Korea Football Association. Nearly half of the footballers who played in the Brazil World Cup over the summer were replaced. Stielike’s top two strikers, Lee Dong-gook and Kim Shin-wook, were also left off due to injuries. Cho Young-cheol of Qatar SC and Lee Jung-hyeob of Sangju Sangmu FC will play instead. The 23 that made the cut are scheduled to play a friendly match against Saudi Arabia on Jan. 4. [NEWSIS]