Orchestra’s head steps down after controversy

Orchestra’s head steps down after controversy 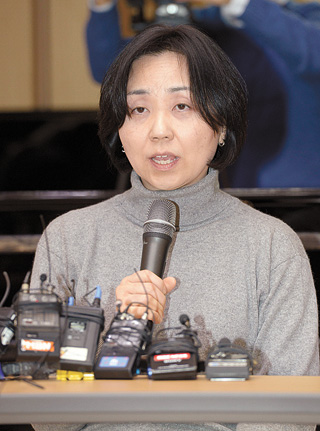 Park Hyun-jung, president of the Seoul Philharmonic Orchestra, announced on Monday afternoon that she will step down after being accused of sexual harassment and verbal abuse by her employees in early December.

The announcement came a day before the orchestra’s board of directors was to officially dismiss her from her post during a board meeting.

“The reason I decided to stay in this post after the controversy was not because I had some sort of lingering desire for the position,” Park said in front of local media. “I wanted to make sure I was there to explain and clarify any misunderstandings while exposing the various administrative problems of the orchestra.”

She added that she would step down to solve the abnormal operation of the orchestra.

“I will leave this post as of today,” she said.

During her last press conference on Dec. 6, Park pointed her finger at the orchestra’s artistic director and principal conductor Chung Myung-whun, insisting that he was “operating the city-run orchestra as if it were his own private club rather than a proper public organization.”

On Monday, Park said that she “sincerely” apologizes for her wrongdoings. But she also added that she feels “hurt by witch hunting and distorted reports and accusations and unfair one-sided investigations.

“I am aggrieved by this situation and have a lot to say, but I will put those feelings aside and leave for now as I believe the truth will come out,” Park said, adding that she hopes the local media will continue to keep an eye on the orchestra so that it can grow to be a “sound and transparent organization.”

Park left the press conference without taking any questions from the media.

Early this month, Park was accused by some of the orchestra’s administrative employees of sexual harassment and verbal abuse, as well as taking advantage of her authority.