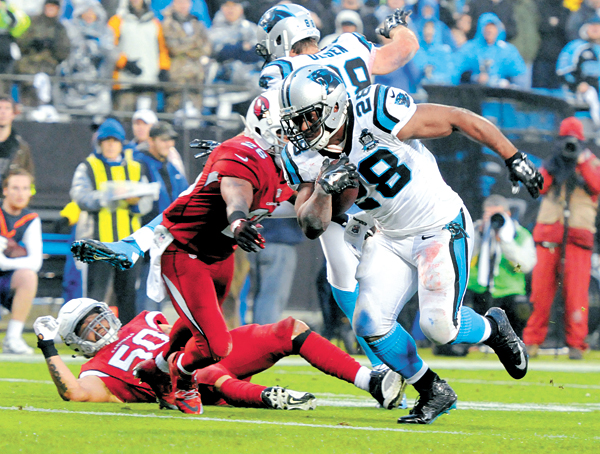 Luke Kuechly knows Carolina’s defense didn’t have much bite earlier in the season.

He said that made Saturday all the more special.

The Panthers held Arizona to 78 yards and forced three turnovers in a 27-16 win, the franchise’s first postseason victory in nine years. It’s the fewest yards ever allowed in an NFL postseason game.

The Panthers (8-8-1) held Arizona to 12 yards in the second half, intercepted Ryan Lindley twice and sacked him four times in a dominating performance.

Carolina’s defense has undergone a remarkable turnaround this season, going from 27th in the league in Week 7 to 10th entering the playoffs.

And the Panthers only seem to be getting better by the week.

“We had a lot of new guys early on who had to get accustomed to each other,’’ said Kuechly, the All-Pro middle linebacker who had a game-high 10 tackles and a key interception. “Now we’re all together and communicating - and that’s huge.’’

The New York Giants held the previous NFL record for fewest yards in a postseason game, limiting Cleveland to 86 yards on Dec. 21, 1958.

Cam Newton overcame two turnovers and threw for 198 yards and two touchdowns and Jonathan Stewart ran for 123 yards and a score on a rain-soaked afternoon.

The Panthers had 386 yards.

Newton was quick to deflect attention to his defensive teammates after his first career playoff win, calling their performance “lights out.’’

“When those guys play like that, it makes it easier on us on our part,’’ Newton said. “Those guys did everything, turnovers, they stopped them. That is championship football right there and we’ve got to do our part offensively to put points up on the board.’’

The Panthers will play at top-seeded Seattle next weekend if Dallas beats Detroit on Sunday. If the Lions win, the Panthers play at Green Bay.

It appeared the Panthers wouldn’t get the yardage record, but Arizona began lateraling the ball around the field on the final play and lost 19 yards.

It was a fitting end to the Cardinals’ offensive ineptitude.

Panthers linebacker Thomas Davis, the only player remaining from the last Carolina team that won a playoff game, called it the most dominating defensive performance he’s ever been around.

“Our coaches did a great job and when they lined up in their formations we knew exactly what to expect,’’ Davis said. “We just ran to the ball and made plays.’’

After a 9-1 start, Arizona’s promising season was undone by a rash of injuries, including to quarterbacks Carson Palmer and Drew Stanton.

Lindley simply wasn’t up to the task of leading a playoff team.

Trailing 27-14, Arizona recovered a Newton fumble and returned to the Carolina 8. But with a chance to get his team back on the game, Lindley fired over the middle but was intercepted by Kuechly, essentially sealing the Carolina win with 11:48 left in the game.