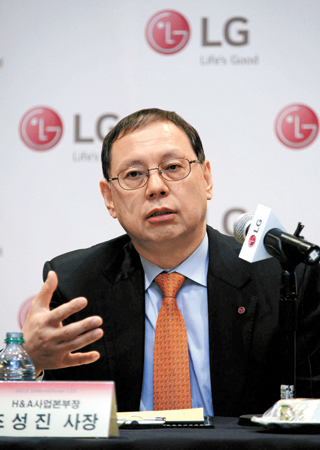 LAS VEGAS - Responding to competition from Chinese and Japanese consumer electronics companies, Jo Seong-jin, president of LG Electronics’ home appliance division, said Thursday that Chinese technology is around 95 percent up to the level of Korean technology, while Korea has a lot to learn from Japan in terms of core technology.

“Chinese electronics companies are quickly coming at Korea, as well as Japan, which has traditionally been a strong player and will recover its competitiveness boosted by the weak yen,” said Jo.

At the CES 2015 in Las Vegas, which runs through Jan. 9, many visitors have made a point to find the booths of Chinese and Japanese home electronics manufacturers, as many as visited Samsung and LG.

However, Jo expressed confidence in LG Electronics’ competitiveness in the global market.

“In the developed markets, where products compete with product reliance, Chinese companies are still behind Korean counterparts in terms of brand power,” said Jo. “For Japan, its technologies of power saving and noise reduction are advanced compared to Korea, but its focus is dispersed as many companies concentrate more on the domestic market.”

In the meantime, Jo unveiled his aspirations for this year, which was to become the No. 1 player in the global consumer electronics market by providing a so-called Total Home Solution to consumers.

Currently the world’s consumer electronics market is dominated by the U.S.-based Whirlpool, Sweden’s Electrolux and Haier, which holds the biggest market share in China.

Total Home Solution is a system that allows customers to use various consumer electronics such as refrigerators, washing machines and air conditioners from anywhere at any time.

“In the washing machine, refrigerator and vacuum cleaner areas, it is possible for LG to become the No. 1 in the world based on revenue,” Jo added.

“In terms of ovens, it is also worth taking on the challenge as we have invested a lot.”

LG Electronics showed off a Twin Load System, which combines a mini washing machine with a large capacity drum washing machine to allow two loads to be done simultaneously.