Economic guru explains his views on the market

Economic guru explains his views on the market 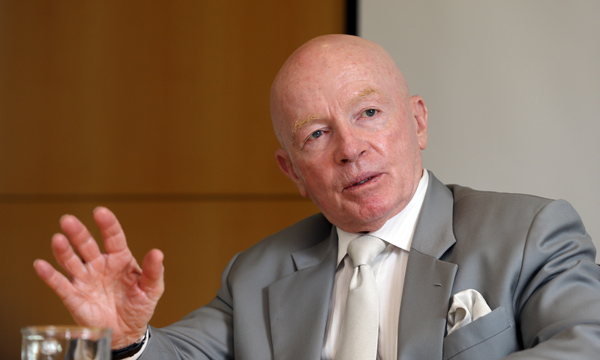 Mark Mobius is the executive chairman of Templeton Asset Management. By Kim Sang-seon

Plummeting oil prices will cause the benchmark Kospi to go up, says Mark Mobius, the executive chairman of Templeton Asset Management.

Widely touted as a leading expert in emerging markets, he has invested $45.7 billion in Asia’s emerging economies. Templeton Asian Growth Fund, managed by Mobius, has also posted 287 percent of its returns since its inception as of November.

The JoongAng Ilbo recently conducted an interview with Mobius to discuss his outlook on the current economic situation and the future investment direction.

Q. What is your outlook on emerging markets in 2015?

A. Opportunities still exist in emerging markets. First, there is a good chance that emerging markets could perform better than developed markets due to higher predicted growth in emerging markets. Also, those markets have much greater foreign reserves and debt-to-GDP ratios compared to those of developed markets. China, India, Indonesia, Mexico and South Korea have announced or embarked upon significant reform measures. These are generally aimed at sweeping away bureaucratic barriers to economic growth and encouraging entrepreneurship. The reform measures have had some short-term costs, but we believe that, should governments succeed in driving them through, longer-term benefits could soon begin to feed into economic growth figures.

Do you think the U.S. Fed rate increase will affect emerging-market countries like before?

The Fed will probably try to raise interest rates. But it will be very gradual, and if they notice an economic downturn, they will back off quickly. A gradual and measured rise should not impact the markets, and particularly the emerging markets, since more and more of their behavior is being influenced by factors other than U.S. economic or interest rate developments. We must remember that money travels globally, so a large amount of yen will find its way to Southeast Asia and other parts of the world, for example.

How do you foresee the Chinese market, which posted strong growth last year?

We keep a positive view in the market. It’s true that a lot of commentaries focus on the slowdown of China’s economy, but they seem to overlook the size of China’s economy now. In 2010, China grew at 10 percent, and about $800 billion was added to the economy. Last year, it grew by 7.7 percent, but over $900 billion was added. The absolute numbers are becoming enormous.

What is your outlook on the Korean market?

The Korean market was down about 4.4 percent last year. However, there is a good chance of a recovery next year, particularly if oil prices remain low, because lower oil prices will decrease Korea’s import costs substantially. We continue to look for opportunities in Korea.

Which sector appears most promising in 2015?

We are enthusiastic about the potential of new technology, with Internet and mobile communications-based technologies, in particular, offering less developed countries the opportunity to leapfrog generations of economic change in more mature markets and move directly to efficient modern systems. This factor could be a particularly dynamic driver of development in frontier markets that include much of Africa, which could give additional impetus to markets that already benefit from highly favorable demographics, abundant natural resources and low starting points, in terms of existing per capita gross domestic product.

What is your investment advice?

Investors should continue to invest funds with diversified global holdings in emerging markets looking at the long-term perspective. It is best to continue investing, particularly when the news is negative. And remember: “To buy when others are despondently selling and to sell when others are greedily buying requires the greatest fortitude but pays the highest rewards.”