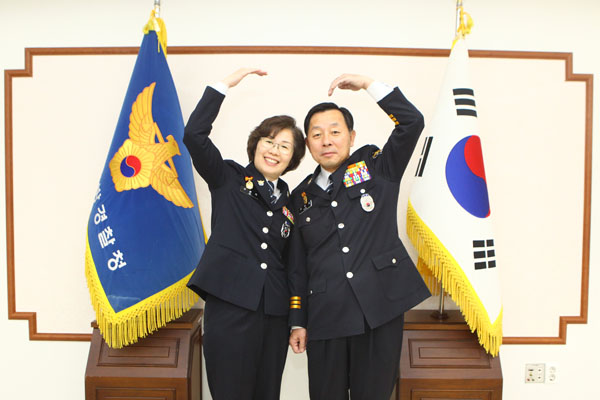 Koo Bon-suk, right, and Kim Sang-seop are Korea’s first married police superintendents. Both of them also started out as police constables.

Husband and wife Kim Sang-seop and Koo Bon-suk both started out their careers working as constables, the lowest rank within the police force.

But since then they both have achieved the rare feat of being promoted as police superintendents. Even rarer is that they are a married couple who both worked their way up from the bottom - a first in Korea.

Koo was promoted in January as a police superintendent, the fourth-highest position for officers among 11, according to the National Police Agency. Incidentally, they are also known as the “flowers” of the police force because a mere 0.5 percent of all officers hold that title.

Koo was recruited as a police constable in 1977. She went on to work in the female detective squad at the Seoul Metropolitan Police Agency and then as a police corporal at the Goyang Police Agency in Gyeonggi. She currently works at the Mapo Police Station in Mapo District, western Seoul, where she was formerly the chief of the emergency response team until February.

“She contributed a lot to the ‘112 reformation’ [to improve the emergency response system], designed by Commissioner General Kang Sin-myeong, at the district level,” said an official at the National Police Agency. “That was why we put her on the promotion list.”

Koo met Kim while working at the public service center at Gyeongnam Provincial Police Agency in South Gyeongsang at the beginning of her career. Back in those days, Kim was a riot police officer.

He is currently in charge of the public relations division at the Seoul Metropolitan Police Agency.

The two tied the knot in 1981, and for the past 30 years have been known as the “police couple.” The couple has two daughters.

During their courtship, they were known to be ambitious and used to study together for the promotion test to become police superintendents. “We considered the library in our town a resort during our paid vacation and went to study all day,” Koo recalled.

Their efforts paid off. Soon after, Kim was appointed to police superintendent in 2011, followed by Koo two years later in January 2014. Both were promoted, having received excellent scores on their exams.

“I am proud to be the first married superintendent couple, both as former constables. I hope it sends a positive message to other police constables.”