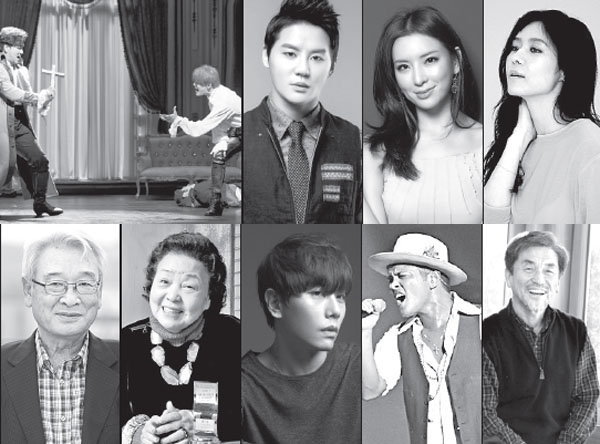 Celebrating its 10th anniversary, the 2014 Interpark Golden Ticket Awards revealed that Kim Jun-su, Jung Sun-ah and Ock Joo-hyun were the three musical actors and actresses with the most star power last year.

Interpark, the country’s largest online ticket website, has held the awards for the past 10 years. It tallies up ticket sales, looks at rankings and uses online voting to discover which stars and shows bring in the biggest audiences.

“The Golden Ticket Awards are significant as there are no separate judges. Assessment by audiences is directly connected to the result,” said an official from Interpark.

About 24,000 people voted online for this year’s awards.

Kim Jun-su, a member of popular boy group JYJ, was especially active in musicals in 2014 because of his enticing performance in “Dracula.” Ock and Jung were jointly awarded in the musical actress category. Singer Ock played lead roles in “Marie Antoinette,” “Rebecca” and “Wicked,” while Jung also starred in “Wicked,” “Dracula” and “Kinky Boots.”

In the play category, 79-year-old veteran actor Lee Soon-jae and 73-year-old actress Kang Boo-ja were the two star vehicles. Lee received 8,873 votes, proving his popularity among all generations. Kang is known for her warm-hearted motherly image and has been bringing theatrical audiences to tears for several years.

As for the most popular show among all genres, the award went to the musical “Dracula,” which features actor Kim as the lead.

In the musical category, the award went to “Mozart!” while the prize for the play went to “Golden Pond,” featuring veteran actor Lee.