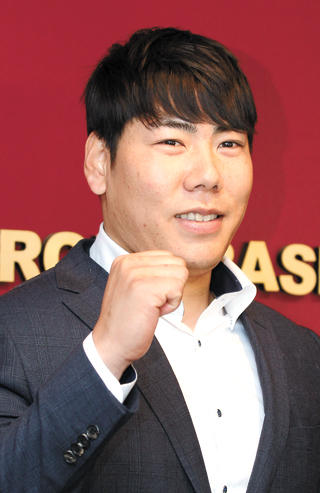 Power-hitting shortstop Kang Jung-ho of the Nexen Heroes is about to make history as the first Korean infielder to make the move to Major League Baseball (MLB).

ESPN, a U.S.-based sports channel, quoted a source as saying the Pittsburgh Pirates reached an agreement Monday with Kang on a four-year deal worth about $16 million.

“The deal, which is pending a physical, also has an option for a fifth year,” the source said.

If the deal is finalized, Nexen will receive $5,002,015 from the Pirates for letting Kang go two years before he would have become a free agent.

Media reports have suggested the right-handed Kang could play an infield utility role with the Pirates and perhaps spend substantial time at first base.

But if money is any indication, Kang can expect to see considerable time on the field. His $4-million-a-year salary would be the ninth highest on the team and third highest among Pirates infielders.

Kang’s physical exam is scheduled for Thursday and Friday, local time, and he is scheduled to fly to the United States on Wednesday.

He also was selected as the MVP for the second round of the postseason, leading the Nexen Heroes to its first Korean Series.