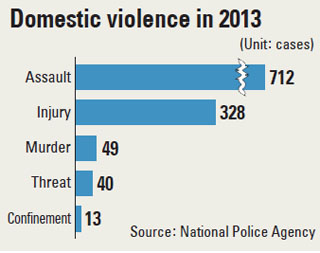 When an armed man took four hostages earlier this week and killed two in Ansan, Gyeonggi, one of the victims was his 16-year-old stepdaughter.

The other was the girl’s biological father.

The police later announced that the 46-year-old man appeared to have killed them after a siege that lasted at least five hours in a four-story apartment building, sparked by his belief that his wife - the mother of the teenager - was cheating on him with her ex-husband.

Earlier, on Jan. 6, a 48-year-old man allegedly strangled his wife and daughters to death in the family’s home in Gangnam District, southern Seoul. Authorities believe the suspect, who suffered tremendous losses in the stock market and had been unemployed for three years, was troubled by his financial constraints.

“The number of people committing parricide for economic issues has sharply risen compared to a decade ago,” said Jeong Seong-guk, an officer with the Seoul Metropolitan Police Agency’s criminal department, who attributed low domestic growth to that phenomenon.

Statistics from the National Police Agency are in line with that assessment. The most recent data shows that the number of domestic violence crimes in 2013 stood at 1,142 - up from 1,036 the year before and 933 in 2011.

From 2008 to 2013, Korea saw an average of 1,143 murder cases annually. Fifty-three, or 5 percent, were parricide cases - much higher than the United States at 5 percent and Britain with 1.5 percent.

Physical abuse was the most common crime, followed by murder and verbal violence.

“When couples break up over financial reasons, [some people] try to take advantage of that by seeking monetary compensation,” said Lee Soo-jung, a criminal psychology professor at Kyonggi University in Suwon, Gyeonggi. “They commit homicide for insurance compensation or to get their hands on family inheritance.”

Two out of every five people who killed a family member from 2006 to 2013 suffered from a mental illness, according to a study announced by the Seoul Metropolitan Police Agency last year.

Jeong added that many criminals usually suffer from depression.

But when it comes to domestic violence here, Jeong noted that Korea’s situation is unique in that filicide, or parents killing their own children, is not uncommon like it is in other countries.

“[Korean] parents think of their children as their possessions,” he said, which is why some don’t mind claiming the lives they believe they have authority over.

“Family crimes usually pop up before or after national holidays [when families get together], and some children grow up acting the same vicious way their parents treated them in their childhood,” Jeong continued.

Yoo Seung-ho, a forensic medicine professor at Seoul National University College of Medicine, added, “Instead of seeing their children as human beings, parents who commit filicide often do so because they think of their children as their alter ego.”