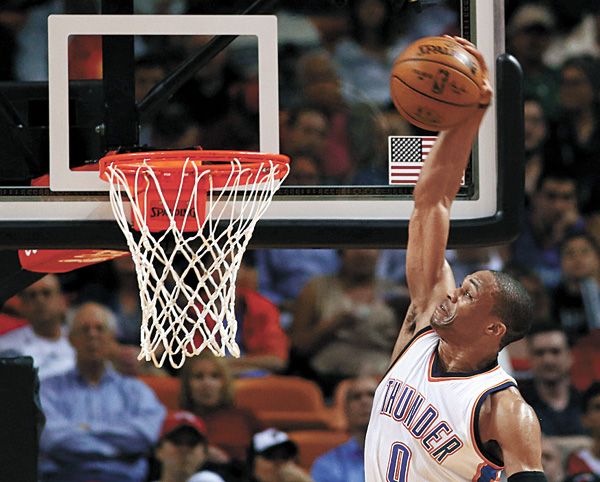 Oklahoma City Thunder’s Russell Westbrook dunks against the Miami Heat during the first half of an NBA game in Miami on Tuesday. [AP/NEWSIS]

Just about every statistic was what the Miami Heat would have wanted.

They kept Kevin Durant and Russell Westbrook off the foul line for the most part, watched Oklahoma City’s two stars combine to miss every 3-pointer they tried, limited both to under 20 points and held the Thunder far below their typical scoring output.

And even that wasn’t enough.

Durant and Westbrook both scored 19 points and the Thunder beat the Heat 94-86 on Tuesday night - the win putting Oklahoma City over the .500 mark for the first time this season.

“We did a great job of keeping our composure, just playing through the defense,’’ Thunder Coach Scott Brooks said.

The stats that doomed the Heat: A 21-11 difference in turnovers, a 22-9 disparity in points off turnovers, and the Thunder getting up 92 shots to Miami’s 68.

“To leave a real competitive defensive game like that on the table is pretty disappointing,’’ Heat Coach Erik Spoelstra said.

“We have to keep pushing,’’ Durant said. “We’re not worried about it. We didn’t come in here and rejoice because we’re over .500.’’

Dwyane Wade scored 18 points and Chris Bosh added 16 for Miami, which fell to 7-13 at home.

Durant was 0 for 8 from 3-point range - matching the second-worst showing of his career - and the Thunder got to the foul line only 10 times, less than half their team average coming into the night.

It didn’t matter, especially after Miami shot only 42 percent in the final three quarters. Miami had three shots to tie or take the lead in the fourth quarter, all of them missing and the Thunder would eventually pull away.

“We weren’t loose with the ball, but we weren’t taking care of the ball,’’ Bosh said.

The game was the exact midpoint of the regular season for both teams. Oklahoma City went 21-20 in its first 41 games, Miami went 18-23.