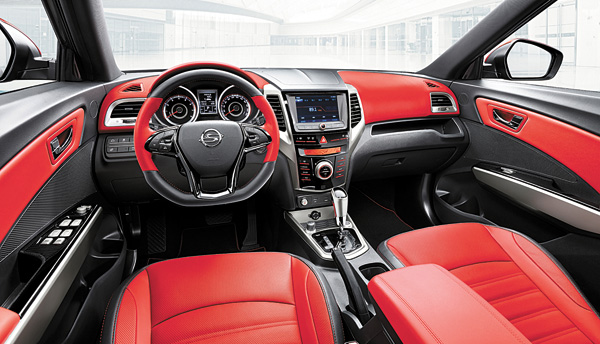 The cabin interior of Ssangyong Motor’s Tivoli. The automaker is betting high on this small sport utility vehicle. Provided by the company

Ssangyong Motor got the name for its new small SUV from a small town in Italy about 30 kilometers (18 miles) east of Rome named Tivoli. The town is known as a good vacation spot where people can bask in the sunshine and relax in a peaceful environment. When the company introduced the vehicle in the Korean market earlier this month, it said customers would be able to feel as though they were on a spring vacation while driving behind the wheel of the Tivoli.

The Tivoli captured the attention of both SUV lovers and industry insiders even before it was introduced. It was Ssangyong’s first new model since 2010 and was supposed to be a savior for the company, which has been struggling with its financial performance and management issues, including the laying off of workers in 2009.

Can the Tivoli part the clouds over the company’s Pyeongtaek factory in Gyeonggi and bring in a little sunshine?

The start has been good. The company told the Korea JoongAng Daily that it has received more than 5,000 Tivoli orders as of Thursday, and it will take a month or two for the cars to be delivered after an order is made. The company started receiving pre-orders Dec. 22 and received about 3,800 orders until the Jan. 13 launch event and about 1,200 more since then.

The model comes in four trims and more than half of the orders were made for its highest trim, the LX, with a starting price of 22.2 million won ($20,500).

The Tivoli is targeted at young customers in their 20s and 30s who want to buy a car that is offered at a low price and also comes with a unique design and many convenient features. It looks like the car comes through on those demands pretty well.

“The small-size SUV market is growing fast in the country,” said a spokesman for Ssangyong. “Only about 63,000 units of small SUVs were sold in 2008, but more than 168,000 units were sold in 2014. Those small SUVs have been attracting female buyers and first-time car buyers since they aren’t too big, aren’t hard to drive and are offered at relatively lower prices.”

Ssangyong invested about 350 billion won over 42 months to develop the Tivoli. Its goal for the vehicle is to include unique designs, including a D-cut steering wheel, which is generally used in sports cars, and semi-bucket seats called Bolster seat backs, which the company says provides comfort even in off-road driving situations. Ssangyong also offers an electronic instrument cluster on the dashboard in six colors: red, blue, yellow, sky blue, white and black.

“I recently took a test drive and really liked its design and price range,” said Choi Dong-jae, 28, who started his first job at a bank this month. “Considering my age and salary, it’s not a big burden to buy it.”

But there are some features that suggest the Tivoli is not quite up to speed of its rivals. Renault Samsung’s best-selling small-sized SUV QM3, which is considered the Tivoli’s most direct rival, has only 90 horse power, but it offers market-leading fuel efficiency of 18.5 kilometers per liter. Considering that most compact SUVs are designed for urban lifestyles, fuel efficiency is still important for consumers even with the falling oil prices. The car’s power train performance is lower than rival Trax from General Motors Korea, which has a 1.4-liter gasoline turbo engine that provides 20.4 kilogram/meter of torque and 12.2 kilometers per liter in fuel efficiency.

The success of the Tivoli is an important issue for the company. At the Tivoli launch event held at the Dongdaemun Design Plaza in central Seoul, Anand Mahindra, chairman of Ssangyong’s mother company Mahindra Group, mentioned the workers laid off in 2009, saying, “If the Tivoli is successful, and if we perform better in other businesses as well, we will certainly bring back those people who lost their jobs in 2009.”

It has been about a week since the Tivoli has gone on sale, and the layoff issue is as relevant as ever. According to the company’s labor union, the CEO of Ssangyong, Lee Yoo-il, and Kim Kyu-han, the head of the union, had a 30-minute meeting at 10 a.m. on Wednesday, and have set four major priorities for the two sides to resolve in the future. One of them was how the company will bring back those 187 laid-off workers.

“It looks like we are making progress after the union met Chairman Mahindra when he visited the factory last week,” said a spokesman of the labor union. “We hope the company will improve sales this year in order to resolve many conflicts we weren’t able to manage.”

CEO Lee said he expects to sell 38,500 Tivolis this year. The company has already sold about 5,000 in a month. Will it be a sunnier year for Ssangyong’s Pyeongtaek factory? The answer will be provided by the market in the days ahead.