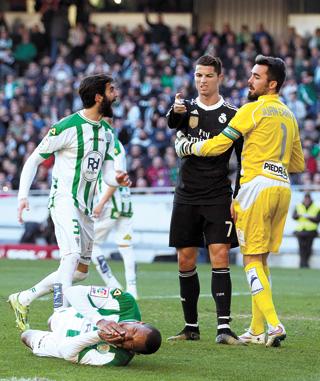 Cristiano Ronaldo was sent off for kicking an opponent in Real Madrid’s 2-1 win at Cordoba, and Lionel Messi reached the 30-goal mark for a seventh straight season in the Spanish league on Saturday.

Madrid completed its comeback when Gareth Bale converted an 89th-minute penalty, after Ronaldo was given a straight red card, to ensure his team kept the league lead.

Messi then did all he could to keep Barcelona one point behind its fierce rival by scoring his 30th and 31st goals in all competitions this season and setting up Neymar for two more in the 6-0 rout at 10-man Elche.

Defending champion Atletico Madrid stayed in the hunt in third place, four points behind Madrid, after Antoine Griezmann netted a brace in a 3-1 victory over visitor Rayo Vallecano.

Madrid has a game in hand, but it may not have its leading scorer for it after his violent outburst.

“There’s still a long way to go this season, a lot of games before we talk about the title,’’ Bale said. “What’s clear to us is that there can be games like this one when the going gets tough. Cristiano is really disappointed with his red card, but these are things that happen in football.’’

Ronaldo was held in check until the 82nd when his frustration boiled over as he lashed out in anger at defender Edimar. He also swiped the face of Cordoba’s Jose Crespo following the kicking incident.

Ronaldo strolled off the pitch, taking time to gesture to the patch on his shirt for Madrid winning the Club World Cup in December. The gesture earned the Ballon d’Or winner jeers from the Nuevo Arcangel crowd.

Elsewhere, sixth-place Villarreal equaled a club record of 17 consecutive games without a loss by beating Levante 1-0 thanks to Luciano Vietto’s second-half goal.

Xavi Prieto also struck after halftime to give Real Sociedad a 1-0 win over Eibar, with both Basque teams remaining in the middle of the table.

With Madrid facing a costly draw at a modest rival, Bale earned a free kick and sent his strike into the defensive wall, where Fede Cartabia used his arm to block it.

Bale then converted the resulting spot kick to take the valuable three points.

Bale had already set up Karim Benzema to level in the 27th after Cordoba’s Nabil Ghilas opened the scoring with a penalty two minutes in.

But it was all Cordoba, as the hosts threatened a second victory over Madrid, and first since 1967, until the surprising chain of events in the final 10 minutes.