Korea heading on to final after beating Iraq 2-0

Korea heading on to final after beating Iraq 2-0 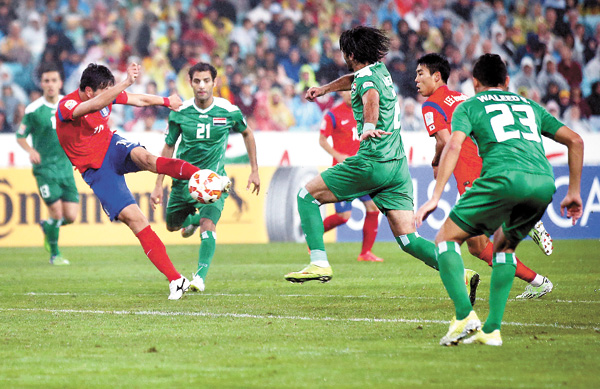 Kim Young-gwon, center, kicks the ball to score his country’s second goal during the AFC Asian Cup semifinal match between Korea and Iraq in Sydney, Australia, on Monday.[AP/NEWSIS]

The Taegeuk Warriors are now one game away from winning the Asian Cup for the first time in 55 years after scoring two goals to win their semifinal match against Iraq on Monday in Sydney, Australia.

In the semifinal match against Iraq, which sent its old foe Iran home in the quarterfinals, South Korea took an early lead when striker Lee Jung-hyup scored off a header in the 20th minute. The team widened the gap when defender Kim Young-gwon’s midrange shot went into the net in the 50th.

Uli Stielike, the manager of the Korean team, made only a few adjustments to the lineup that he used in the quarterfinal.

Lee Jung-hyup, who also scored against Australia in the group stage and started in the quarterfinals, proved yet again that he was worth his spot on the starting 11.

One of the biggest changes in Korea’s starting lineup was right midfielder Han Kyo-won, who played for just 12 minutes in the first group match against Oman. He replaced Lee Chung-yong, who was injured in the second half of that match. The German manager placed Son Heung-min on the left and Nam Tae-hee as the attacking midfielder, and sent in Ki Sung-yueng and Park Joo-ho in as defensive midfielders.

On defense, Kwak Tae-hwi, Kim Young-gwon and Kim Jin-su started again, but Cha Du-ri, who made a spectacular breakaway to assist in the side’s second goal in the quarterfinals, started instead of Kim Chang-soo.

Stielike also sent in his most trusted goalie, Kim Jin-hyeon, who has not allowed any goals so far in the tournament.

On the Iraq side, key player Yaser Kasim, who stabilizes the midfield, was absent after he was shown a yellow card in two consecutive matches.

The game was deadlocked at the beginning as both sides did not find it easy to break through one another’s defense.

But Korea’s play was effective against Iraq, which kept its defense deep in its own half, allowing Korea to maintain possession for a majority of the time and letting through midrange efforts by Nam Tae-hee in the 10th, Kim Jin-su in the 17th and Son Heung-min in the 19th.

Iraq was more aggressive for the remainder of the first half, but failed to take any strong shots as the ball stayed mostly with the Korean side and goalie Kim Jin-hyeon denied Iraq’s shots.

But the Korean goal came under threat a couple of times by Iraqi midfielder Amjad Kalaf in the 41st and 44th, after the Taegeuk Warriors defense failed to clear the ball.

Iraq tried to equalize, but the game was essentially over after Lee Jung-hyup received the ball in front of the penalty box and defender Kim Young-gwon netted it off his left foot in the 50th minute.

Trailing 2-0, Iraq took more chances on Korea’s goal by moving its formation further forward and sending out strong attacks on the flanks. Iraq made a six attempts on goal in the second half, but none went in.

After winning the semifinal in Sydney, South Korea is now through to the final, which will be held at the same stadium on Saturday. The team will face the winner of another semifinal match between host country Australia and underdog United Arab Emirates. Australia is considered the stronger team, but the United Arab Emirates also made the tournament’s biggest upset as it eliminated defending champion Japan in the quarterfinals.