Surging Park comes up a shot short in Humana

Surging Park comes up a shot short in Humana 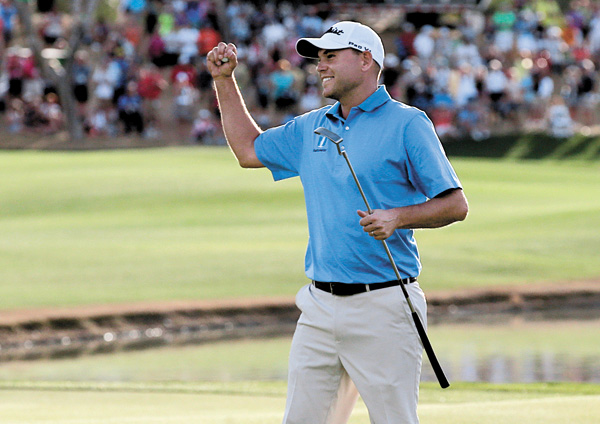 Bill Haas pulled ahead with a 20-foot birdie putt on the par-4 16th and made par on the final two holes for a one-stroke victory Sunday in the Humana Challenge in La Quinta, California.

Tour rookie Park Sung-joon, who is 224th in the world rankings, finished tied with four others at 21-under 267.

It was his best finish since he jumped up to the PGA Tour from the second-tier Web.com Tour last year.

Park, who began the day tied with two others in ninth place, birdied the third and sixth holes on the front nine.

Park was the only non-American among the top 10 finishers.

Haas closed with a 5-under 67 for a four-round total of 266 and his sixth PGA Tour title and first since the 2013 AT&T National. He won the 2010 event at PGA West for his first tour victory.

Haas was making his first start since November. He took the long break to rest his left wrist, which he fractured in April when he fell down the stairs at Hilton Head.

Part of a six-man tie for the lead after a par save on the par-3 15th, Haas got to 22 under with the birdie putt on 16 on the Arnold Palmer Private Course.

Haas two-putted for par from 20 feet on the par-5 18th after pulling off an awkward layup with his ball perched on the front lip of a right-side fairway bunker.

Kuchar took a two-stroke lead into the final four holes to play Saturday, but bogeyed three of the last four holes in the third round to fall a stroke back.

Haas eagled the par-5 sixth for a share of the lead, setting up his 15-foot putt with a 260-yard, 5-wood from the dormant left rough with the ball below his feet.

The 32-year-old former Wake Forest University player birdied the par-4 eighth, punching a low, spinning wedge from 70 yards to eight feet from the pin, and got to 21 under with a 7-foot birdie putt on the par-5 11th.

He made a key par save on the 131-yard 15th to keep a share of the lead. Short-sided in the left bunker, he blasted to six feet from the cup.

Haas broke out of the tie on 16, and then missed a 10-foot birdie try on the par-3 17th with a bighorn sheep grazing nearby at the foot of the Santa Rosa Mountains.

On the par-5 18th, with water running the length of the hole on the left, his drive stopped on the top edge off the right-side bunker. Standing in the bunker with the ball in the dormant grass at nearly waist level, he choked up on an 8-iron and slashed 80 yards down the fairway. That left him 170 yards to the green and he hit safely to the middle.

Thomas, playing alongside Haas and two-time heart transplant recipient Erik Compton in the final group, dropped out of the lead on 16 with a double bogey after hitting his approach from a bunker into the All-American Canal. The 21-year-old former Alabama player birdied 18 for a 69.

Simpson finished with a 64, and Weekley shot 65.

Phil Mickelson shot his second straight 68 to tie for 24th at 15 under in his first start since the Ryder Cup in September.