Lotte gets its first female managers

Lotte gets its first female managers 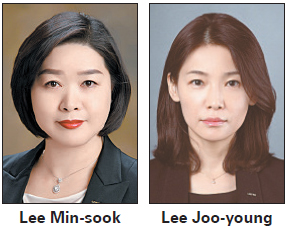 Women have headed smaller stores and outlet malls for the group before, but none have ever been put in charge of a department store branch.

Lee Min-sook will be the chief manager of Lotte Department Store in Gwanak District, southern Seoul, while Lee Joo-young will take the top position at the Ansan branch in Gyeonggi.

Lee Min-sook, 45, started her career at Lotte in 1988. Before her promotion, she was the manager of Lotte Young Plaza in Cheongju, North Chungcheong, and was a retail and marketing specialist in food and household goods.

Lee Joo-young, 46, started her career at GS Square, which was later acquired by Lotte Group, and was the chief manager at Lotte Young Plaza in Daegu. She specializes in marketing and promotions.

In Korea, women represent a miniscule 1.9 percent of board directors, according to a GMI Ratings survey from 2013, which puts South Korea at the bottom of the ranking out of 45 countries.

In response to the low ratings, Shin Dong-bin, the chairman, said last year that the group would work toward filling 30 percent of its executive posts with women.

“For a company to ensure its future competitiveness, including women in the workplace is critical,” Shin said last year.

“Lotte will take the lead in creating a business environment where talented women can work without having to worry about balancing family life and housework.”

Lotte Group is the only one among the country’s 10 biggest chaebol that has more female employees than male employees. In 2013, Lotte employed 23,922 women, accounting for 50.4 percent of its total workers. Last year, the proportion of female employees exceeded 60 percent.

But the plain figure does not necessarily mean that Lotte offers quality jobs for women.

Lotte has the highest proportion of contract-based employees among all major conglomerates.

Chances are high that many of the women are stuck in temporary positions while the vast majority of executive-level posts are filled by men.

But Lotte vowed to narrow the gap between male and female employees.

“Women workers will serve as a key force driving the company in the future,” said Park Wan-soo, head of the management support division at Lotte Department Store.

“In the marketing section, the role of women is really important in terms of communication.”