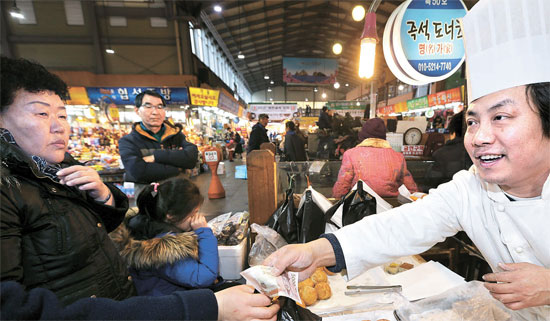 Kim Jung-kwang, a former pastry chef at the Westin Chosun hotel, hands out his shop’s trademark donut to a customer at Jeil Market in Uijeongbu, Gyeonggi, on Jan. 26. By Shin In-seop


More than 10 customers were lined up outside a small donut stand at Jeil Market in Uijeongbu, Gyeonggi, at 1 p.m. on Jan. 25.

The trademark doughy desserts at Instant Donut Prestige House last barely a minute after they come out of the fryer.

“Since many customers are already in line whenever I visit, I submit my order and then go shopping at the traditional market for fruits and fish, which is the exact time I need to wait for my donuts.”

Similar scenes can be seen at Neunggok Traditional Market in Goyang, Gyeonggi. On Wednesday, a store named Milal Wang Jjinbbang (“wang” means king, or large, while “jjinbbang” means steamed bread in Korean) is also crowded with customers. Its hottest-selling item is fried steamed bread. Since the place is short-staffed, the bread is only sold on weekends and during a separate market that opens every five days on dates that end with the numbers 2 and 7.

“I come here with my family every week to buy this grilled steamed bread and then shop at the traditional market,” said Lee Yong-gyun, 58, who lives in Sangam-dong, western Seoul.

These popular food stands are boosting the energy of traditional markets, especially because the buzz around them lures people in their 20s and 30s.

Because the food at the stalls is usually cheap, people who live in Seoul or other metropolitan areas are becoming regular customers.

The trademark donut sold at Jeil Traditional Market is a masterpiece by Kim Jung-kwang, who started the shop at the corner of his mother’s vegetable store in December 2012. Kim is a veteran pastry chef who has previously worked at the Westin Chosun hotel and Shinsegae Group for 13 years.

“I tried to open my own bakery, but then I thought it would be more competitive to make instant donuts with a strategy of quick sales and small profit,” he said.

Kim said that the popularity behind his donut comes from high-quality ingredients. Instead of putting money into the interior and exterior of the shop, he buys flour that is more than twice as expensive as the basic kind. The 40-year-old then lets the dough sit for 40 minutes twice before he fries it. His cooking oil is also a superior brand. He refills his fryer with a new 18-liter batch of oil once every two days.

And others vendors at the market are benefiting from the stand.

“A place like the donut shop raises the revenue of nearby shops by more than 10 percent,” said Lee Sang-baek, president of Jeil Market Arcade Prosperity Committee.

As for the fried steamed bread, Kim Nam-soon created the recipe unexpectedly. She took steamed bread as a snack when she went on a summer vacation with her family in 2013. But the family had no way to eat it warm, so she fried it in a greased pan.

Her children loved the roasted steamed bread, so the 46-year-old started to sell it at her stall starting last year.

“Many customers ask me how I got the idea of roasting the steamed bread when they visit,” said Kim. “Whenever I get that question, I tell them about my summer vacation and they just love it.”

As these kinds of food shops are gaining notoriety, even the regional government is stepping up, saying that it will try to turn them into a main vehicle to promote the country’s traditional markets.