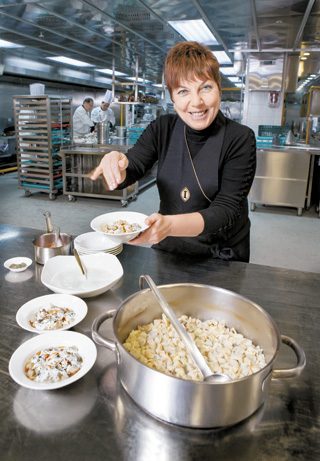 Every great capital has a diplomatic corps representing their countries and promoting their own cultures. Ambassadors are expert entertainers and their spouses are often skilled at introducing the cuisine of their homeland to their foreign hosts. In this series, the Korea JoongAng Daily asks the spouses of Seoul’s ambassadors to introduce our readers to a favorite entree from their homelands. In each installment, his or her excellency will be joined by a chef from one of the two InterContinental hotels in Seoul who prepares a Korean dish that complements the foreign offering. Mashitge deuseyo, afiyet olsun and bon apetit!

Pinar Okcal was ready to cook when reporters from the Korea JoongAng Daily met her at the Banquet Kitchen of the Grand InterContinental Seoul Parnas in Gangnam District, southern Seoul, on Jan. 21.

“I have a cookbook in progress - nothing big, just to pass some of my recipes to my children,” she said. Manti is one of her favorite Turkish dishes, she explained, because the very process of preparing it becomes "family time, in which everyone takes a different role.”

Q. Why did you choose manti for today’s dish?

A. I chose manti because of its correspondence with the Korean mandu. Manti is believed to have been originated by Central Asian Turks and it was carried across Central Asia to Anatolia by migrations in the 11th and 12th centuries. Likewise, Korea's mandu is also said to arrive in Korea through the Mongols in the 14th century. Although they have the same root, they have been refined according to the tastes of the society they were adopted in. This ancient dish of Turkish cuisine is commonly served as a single dish and also it is one of my favorites.

The legacy of the imperial kitchen is inescapable and it led to the evolution of a grand cuisine through differentiation, refinement and perfection of the dishes.

The foundation of the cuisine is grains, wheat and rice, and vegetables. We Turks are purists in our culinary taste - the dishes are supposed to bring out the flavor of the main ingredient rather than hiding it under sauces and spices. Spices and herbs are used very simply and sparingly.

For example, dill weed is used for zucchini, whereas parsley is used with eggplants. Cumin is sprinkled on red lentil soup or mixed in ground meat for making meat balls, kofte. Lemon and yogurt are used to complement vegetable dishes.

Speaking about vegetables, it is important to know that eggplant has a special place in Turkish cuisine. All of these vegetables are also prepared with unique recipes using meat, which are served with grains like pilav. If you want to taste these dishes you have to visit a lokanta in Turkey where these traditional recipes are prepared.

Grilled meat and kebab is another category of food dating back to the time when nomadic Turks learned to grill and roast meat over campfires. The unique taste of doner kebab, shish kebab, and other kebabs are due to the breeds of sheep and cattle as well as to special marinades and ways of cooking.

Turkey, surrounded by four seas, is also a country where seafood is consumed widely. Coastal towns are experts in cooking seafood. Bonito, bluefish, turbot, mackerel, small fish called hamsi are common fishes along with other seafood like mussel, octopus and squid.

The well-known sweets associated with Turkish cuisine, Turkish delight and baklava, give the impression that these may be typical desserts eaten after meals.

But our family of desserts is much richer. We have a variety of milk- and fruit-based desserts. Rice pudding cooked in an oven, quince and pumpkin desserts topped with syrup are among the most popular.

To complete a good meal, Turkish coffee for Turks is a must. I should also mention tea, prepared in a very special way by brewing it over boiling water and served in delicate small glasses is an essential part of our daily life.

Almost all grains and vegetables as well as meat.

Semolina, bulgur, green lentils, feta cheese and plain yogurt can not be easily found in Korean markets, so I buy them from foreign markets in Itaewon.

There are several Turkish kebab houses in Seoul.

They serve different types of kebabs but these establishments rarely serve traditional dishes other than kebabs.

My husband and I usually go to restaurants in Itaewon and Gangnam when we want to eat kebabs.

Any personal observation about Korea?

Koreans welcomed us very warmly when we arrived in Seoul one year ago. Seoul is a very modern, dynamic city which offers beautiful landscapes, palaces, temples, museums, bustling markets and a variety of restaurants. I wish I can learn at least one craft Koreans practice so naturally during my stay here.


1. To make dough, knead eggs, flour and salt together for about 10 minutes. While kneading, sprinkle water as needed to keep the dough soft but not overly sticky. Remove, cover with a towel and leave to rest for 20 minutes.

3. Once the dough has rested, divide in half and roll each portion into a large circle about 2.5 millimeters (1/10th of an inch) thick. Sprinkle dough with flour while rolling to ensure it doesn’t stick to the rolling pin.

4. Cut rolled dough into squares of 2.5 centimeters (about an inch) on each side.

5. To form dumplings, place a small amount of filling into the center of each square. Pull corners together and pinch to form small sacks.

6. In a medium-to-large saucepan combine water, beef stock and salt. Bring to a boil over moderate heat.

7. Add dumplings and boil for 15 minutes.

8. Remove dumplings, place in a serving dish and cover with plain yogurt.

10. Pour the butter-chili mixture over the dumplings, sprinkle with dried mint and serve.