Every great capital has a diplomatic corps representing their countries and promoting their own cultures. Ambassadors are expert entertainers and their spouses are often skilled at introducing the cuisine of their homeland to their foreign hosts. In this series, the Korea JoongAng Daily asks the spouses of Seoul’s ambassadors to introduce our readers to a favorite entree from their homelands. In each installment, her excellency will be joined by a chef from one of the two InterContinental hotels in Seoul who prepares a Korean dish that complements the foreign offering. Mashitge deuseyo, bom apetite and bon appetit!

Rarely do the ambassadors’ spouses who participate in this series arrive at the hotel kitchen empty-handed. From traditional cooking tools and unique spices to homemade desserts and pastry, there’s always that mysterious shopping bag voluntarily brought, filled with tasty surprises that light up the entire kitchen.

When it was Marina Nobre Quinteiro’s turn to whip up a taste of her homeland, she brought along the key ingredient of her dish: large chunks of codfish, directly shipped from Portugal.


For her dish, only Portuguese codfish would do.

“When I’m in Korea, I order 50 kilograms [110 pounds] of Portuguese codfish every year and stock it at my house” she said smiling. “Nowhere else can you find a similar taste.” 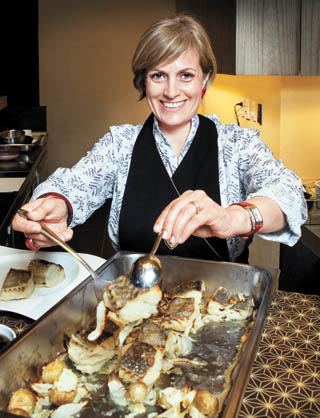 Marina Nobre Quinteiro, wife of the Portuguese ambassador to Korea, serves up codfish with baked potatoes at the Grand InterContinental Seoul Parnas in Gangnam District, southern Seoul. By Park Sang-moon

Q. Why did you choose baked codfish with potatoes for today’s main dish?

A. I chose this recipe not only because cod is a delicious fish, but because it is exquisite, easy to prepare and highly appreciated in Portugal, both by the locals and visiting foreigners. Cod can be cooked in a variety of ways. In Portugal, we say there are 1,001 ways to cook it. The only problem is that it is too expensive. Even so, the Portuguese eat a lot of codfish due to the tradition. The Atlantic cod, for several centuries, was one of the most profitable businesses in my native country.

As for the ingredients, I have personally ordered the codfish I’m using today from Portugal because I cannot find it dried and salted here in Korea, the way it has to be. I’ve brought my own olive oil, too, made from a family recipe.

Although it stems from a relatively small geographic area, Portuguese cuisine features Atlantic and Mediterranean influences, which are noticeable in the amount of fish traditionally consumed by the locals. The basis of Mediterranean cuisine relies on the trilogy of bread, wine and olive oil, and it is these ingredients that are often spotted on tables all across Portugal. Vegetables are also frequently used in various soups, and fresh fruits are noteworthy as well. 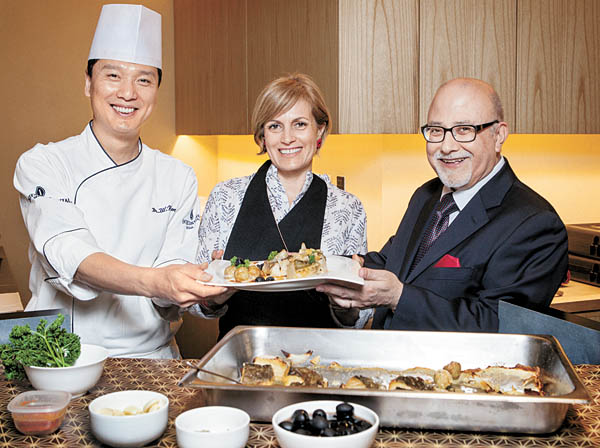 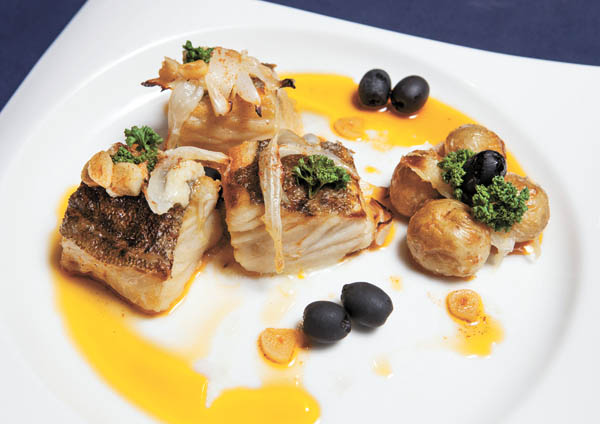 Meat, especially pork, is also whipped into myriad regional delicacies, bringing out the best tastes of hams and sausages. With the advent of maritime discoveries, Portuguese cuisine quickly integrated spices, sugar, beans and potatoes, all currently considered essential products in the local diet.

I’m thankful that most ingredients used in Portugal can be spotted here, but there are some that I cannot find. Some vegetables, meat products - hams, sausages, etc. - and cheeses lack diversity in Korea. In Portugal and all over Europe, we have a huge array of dairy products that are nonexistent in the local market. Due to the lack of these products, I find it impossible to cook some authentic Portuguese dishes, including feijoada [a stew of beans with beef and pork] and cozido a Portuguesa [a stew of beef, pork and smoked sausages served with greens].

What are the best restaurants in Seoul serving your cuisine or a similar one?

There is a Portuguese restaurant called Taverna de Portugal [in Mapo District, northwestern Seoul], which belongs to a Portuguese national married to a Korean lady. At this restaurant, you can eat typical Portuguese food, like our famous cod. You can also enjoy francesinha, [a Portuguese sandwich originally from Porto, made out of bread, meat, cheese, tomatoes and beer sauce].

What similarities have you discovered between Portuguese and Korean cuisines?

People in Portugal mainly consume meat, including pork, beef and chicken. We also blend various vegetables in our dishes, which I think goes the same for Korea. Of course there’s one big difference: Koreans use a lot of hot spices! Another common culinary aspect is that both countries seem to eat a lot of fish. 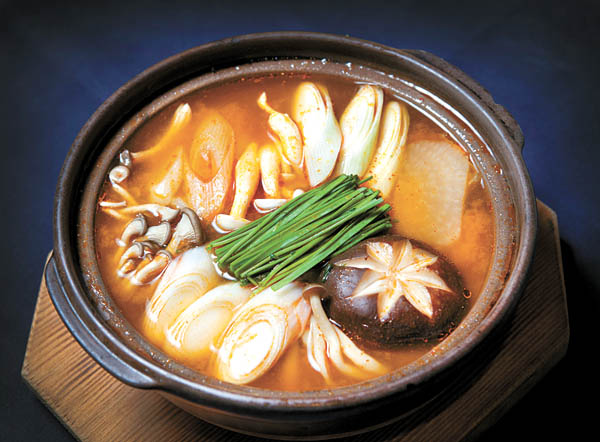 My culinary style hasn’t changed much because I can find most ingredients for my Portuguese table.

What Korean dishes are you fondest of and why?

The local dishes that I enjoy the most are bibimbap [rice mixed with vegetables], galbi [barbecued short ribs] and mandu [dumplings] because they include a lot of vegetables and meat. The way in which they are each prepared seems to give them a very pleasant taste. One aspect of Korean food that I appreciate is that there’s always a large amount of vegetables, which I consider good for our health.

Please give us your personal observations about Korea, how it compares to your country or other countries which you have lived.

It was easy for me to integrate in this Asian country because I lived for six years in Beijing. Of course there are many differences between Korea and China, but at least the experience living there enabled me to grow familiar with Asia.

South Korea was a pleasant surprise for me. I must confess I was a little worried when my husband was assigned here, because my knowledge about the country stemmed from the media, which usually put more weight on the negative sides than the positive. Almost all news was relevant to the division between North and South Korea. But after three years living here, I’ve come to realize the abundance of beauty one can find here. Locals are friendly and kind, the food is great and ancient temples blend well with modern buildings. Overall, I consider Seoul a modern, pleasant city to live in.

What are some key differences between Portugal and Korea?

There are many differences between the two countries, including the population density. In Portugal, there are about 10 million people in the entire country, similar to the amount in Seoul alone. Portugal also has a very aged population. In Korea, especially in Seoul, it seems that the population is very young, which I think is beneficial for the economy.

Portugal is a small country, but it bears a rich history and culture. The landscape is fascinating and the Atlantic Ocean provides a unique charm to the coastal regions. There are fantastic beaches with a pleasant, Mediterranean climate. Portuguese are normally friendly, peaceful-minded and very welcoming to visitors.

I love visiting Insa-dong [in central Seoul]. It is a very nice place to walk around and shop. It’s clean, well-organized and has lots of fine Korean eateries that are enjoyable to take friends and family who visit us.

The Namsangol Hanok Village [in Jung District, central Seoul] is another beautiful venue I spend my weekend afternoons, and I think the magnificent colors of spring and autumn make it even more special.

Seorae Village [in Seocho District, southern Seoul], where my youngest daughter attends school at the French School of Seoul, is a neighborhood of lively shops and bakeries. Speaking of shopping, I frequent the Seoul Express Bus Terminal Station area [in Gangnam District, southern Seoul] and Namdaemun Market [in Jung District] to browse through the latest items.

Marina Nobre Quinteiro was born in the northern part of Portugal, in a town called Viseu. It is also the hometown of the famous Portuguese Renaissance painter Grao Vasco (1475-1542), who led Portuguese art in the 16th century. Married to her husband for 33 years, she has four children - two girls and two boys - and a 2-year-old grandson. She studied modern languages and literature at the Universidade Aberta in Lisbon, French at Alliance Francaise, and English at a Berlitz language school. At the Institute of the Arts Barcelona, she learned how to restore old books and documents and design jewelry for one year each. For five years in Barcelona, she studied Spanish.

Antonio Quinteiro Nobre has served as the Portuguese ambassador to Seoul and Pyongyang since May 2012. He joined the foreign service in 1985 and was accompanied by his family to all his previous postings: Helsinki (1990-1995), Beijing (1995-1998 and 2006-2009) and Barcelona (2001-2006). He studied law at the Classical University in Lisbon and worked as a teacher for seven years.