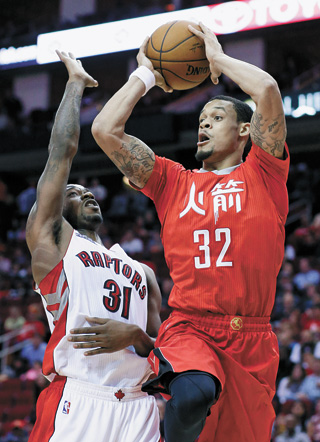 The Houston Rockets needed a spark against the Toronto Raptors to bounce back from a loss to Dallas in which they were so lethargic that Coach Kevin McHale said it looked like they were wearing “mud shoes.’’

Corey Brewer provided that spark, coming off the bench to score a season-high 26 points and help the Rockets cruise to a 98-76 win on Saturday night.

James Harden scored 16 of his 20 points in Houston’s big third quarter to help in the victory.

“Last night was a rough game,’’ Brewer said of Friday’s loss. “We didn’t have any energy coming back from the break and it bit us pretty bad. So I felt like I had to bring energy ... I tried to come out and play hard and everything worked out.’’

Harden, who leads the NBA in scoring, got off to a tough start and had just four points by halftime. The Rockets led by four points with less than 4 minutes left in the third before going on a 12-1 run, with seven points from Harden, to take a 68-53 lead into the fourth and end his night.

“We didn’t play a clean game, but we played hard,’’ McHale said. “We looked lively and we looked bouncy.’’

A night after handling Atlanta 105-80, the Raptors had a chance to extend their road winning streak to a franchise-record six games. Instead, they were done in by 23 turnovers to snap a four-game winning streak overall and lose away from home for the first time since Jan. 21.

“They were hungrier, played harder and did all the hard and grimy things that we did last night that we didn’t do tonight,’’ Toronto Coach Dwayne Casey said of Houston.

James Johnson’s 27 points led the Raptors, who entered averaging 105.6 points a game but struggled with a Houston defense that tied a season-high with 17 steals and had nine blocked shots.

“It’s about effort and energy,’’ Harden said. “When you have the entire team playing like that for four quarters, it’s tough to beat us.’’

The Raptors had five turnovers and Jones blocked two shots to help Houston build the lead.

Toronto finally cleaned things up and outscored Houston 9-5 the rest of the half to cut the lead to 40-36 at halftime.