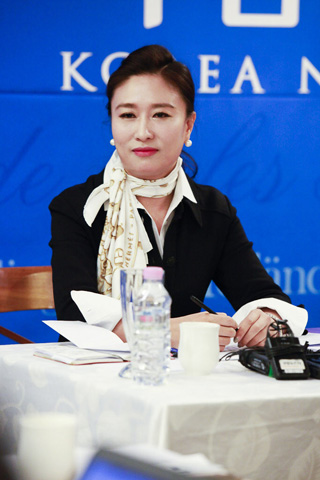 The Korean National Opera’s new artistic director abruptly resigned on Tuesday evening, a decision she relayed to local media in a two-page press release without notifying the Ministry of Culture, Sports and Tourism.

Han Ye-jin’s resignation comes just three weeks after she was officially appointed despite fierce criticism from several singers in the country’s opera circle. The performers formed an emergency committee, arguing that the 44-year-old director was unqualified as well as too young. It also criticized the government for parachuting officials into executive positions.

“I am expressing my intention to resign for personal reasons,” Han said in her press release. “I decided not to cling on to this position anymore because my sense of frustration deepened [over the past three weeks] more than my will to challenge.

“To be more accurate,” she added, “I should say I no longer can stay in this post, as my feelings have been hurt and I’ve become mentally fatigued.”

Han explained that she had begun doubting whether she should continue in the position when those who opposed her “even exposed my past, created numerous stories to spread and hurt the feelings of my family members.”

During a press conference on Feb. 4 for Han’s official appointment, she expressed her desire to breathe new life into the Korean National Opera by nurturing young audiences and eradicating the existing practice of casting singers based on school ties or regionalism.

Responding to her critics who claimed she was too young for the job, Han said at the time that she would not hesitate to turn to veterans in the opera circle to seek out advice and guidance.

However, it appears her plan did not go as expected.

“I’ve realized that I lack the capacity to ask for advice from my elders in the opera,” she said, and admitted that she failed to “adequately win over the hearts of the many opera fans in the country and communicate with them.”

An official from the Ministry of Culture, Sports and Tourism said the ministry had been unaware of Han’s intention to resign until she distributed her press statement. The source added that officials would process it once it was tendered.

Regarding criticism over the government’s personnel policy, a high-ranking official from the Culture Ministry said that officials believed they had properly “vetted [Han],” but admitted that they “did not do a good enough job.”

The ministry plans to speak to veterans in the opera circle to nominate Han’s successor. The artistic director position at the Korean National Opera had been vacant for 10 months before she was appointed. In her press release, Kim expressed her apologies toward Culture Minister Kim Jong-deok, who had appointed her as artistic director.

She said she would return to the stage as an opera singer as soon as her “wounded heart was healed.”