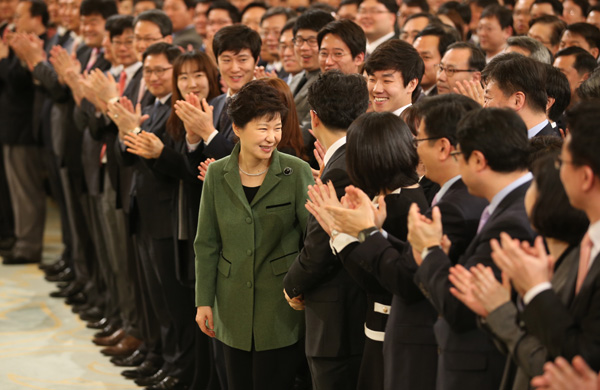 President Park Geun-hye, center, exchanges greetings with staffers at the Blue House before a morning meeting on Wednesday to mark the second anniversary of her inauguration. [Joint Press Corps]

The ruling Saenuri Party exhorted the Park Geun-hye Blue House to coordinate policies with the party better in its third year in office - and warned that it would not be frozen out of policy decisions.

During its first policy coordination meeting with officials from the Blue House and Park government Wednesday morning at the National Assembly, Saenuri leadership emphasized that the Blue House needs to seek more cooperation and advice from the ruling party’s 158 lawmakers and not repeat its previous unilateral policy approach.

Saenuri floor leader Yoo Seong-min was quoted as saying in the meeting that the time has come for the Blue House to stop coming up with policies on its own and then pressing the Saenuri to legislate them, according to party officials.

Finance Minister Choi Kyung-hwan and Social Affairs Minister Hwang Woo-yea were among the government officials in the meeting, while Cho Yoon-sun, presidential secretary for political affairs, and Hyun Jung-taik, senior secretary for policy coordination, attended from the Blue House.

During the meeting, the participants agreed to pursue reform of the money-losing pension plan for government workers. The reform was one of the key policy agendas for the government this year. This year is viewed as optimal for difficult policy initiatives because there are no major elections scheduled in 2105 except for an April by-election for three parliamentary seats.

In fact, the Wednesday policy coordination meeting was the first such meeting involving representatives of the Park Blue House, her government and the ruling party leaders. That raises the chances of the ruling party gaining a bigger role in policy discussions.

Social Affairs Minister Hwang agreed with the need for more cooperation between the government and the party, telling reporters after the meeting that they reached a consensus that the party should take a lead in pushing policy initiatives.

The ruling party’s demand for more clout was a key issue in the last two party leadership elections in July 2014 and earlier this month.

Calls for a change in attitude at the Blue House’s have gained traction with the falling approval ratings of the president, which sank below 30 percent last month.

Meanwhile, Park celebrated the second anniversary of her inauguration Wednesday morning with Blue House officials. In an address, Park urged Blue House officials to devote themselves to “laying down the groundwork for reunification” and “achieving economic reform.”