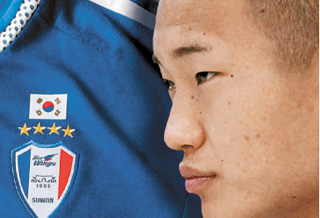 A North Korean national team striker wearing a uniform with the South Korean national flag is almost unimaginable, but it happened on Wednesday night when Jong Tae-se was on the field with Suwon Samsung Bluewings FC as they won their Asian Football Confederation Champions League match.

Nagoya-born Jong is what is known as “Zainichi Korean,” an ethnic Korean who lives in Japan. Many are descendants of Koreans who moved to the country during the colonial era. The striker, who played for North Korea in the 2010 FIFA World Cup, holds both a South Korean and North Korean passport.

Jong, who became the fourth player ever to play in the South Korea’s K-League with North Korean nationality after signing with the Bluewings in 2013, played full time to contribute his club’s 2-1 win over Urawa in the AFC Champions League Group G opener held in Suwon World Cup Stadium in Suwon, Gyeonggi, on Wednesday.

The Bluewings’ uniform for this season’s AFC Champions League has a South Korean flag on the left side of the chest. The four-time K-League champion said that including the “Taegukgi” in the design was intended to promote pride in the K-League and represent Korean football.

Jong, who will turn 31 on Monday, could not compete in the Asian Cup in Australia last month because he was sick and therefore was left off North Korea’s roster. The complex situation of his nationality and the fact that he is playing in South Korea may have influenced the decision, but the former Vfl Bochum and FC Koln player is consoling himself by playing in the AFC Champions League.

The match against Urawa was what Jong had been waiting for. When he was playing for Kawasaki Frontale in Japan’s J-League, he bagged two goals in three meetings against Urawa.

On Wednesday night, Jong didn’t score, but he was still strong against Urawa as he helped defender Oh Beom-seok score an equalizer in the 56th minute to make the match 1-1.

The Bluewings, the runner-up in the K-League last season, eventually collected a game winner with Brazilian forward Leonardo’s header in the 87th minute to beat Urawa 2-1. It is now the only South Korean club to get a victory in its group opener in the Champions League.

“I’m happy that we defended the pride of the K-League’s best popular team,” Jong said. “I will score a goal against Urawa in the next away match.”

Jong wasn’t the only “Zainichi” on the pitch on Wednesday, as Urawa’s Tadanari Lee, whose Korean name is Lee Chung-sung, also joined the match as a substitute in the 63th minute.

Seoul was preparing to avenge its 2013 AFC Champions League final match, in which it lost the trophy based on away goals, but couldn’t do so after giving up a goal to Guangzhou’s Brazilian national team forward Ricardo Goulart on the 32nd minute.