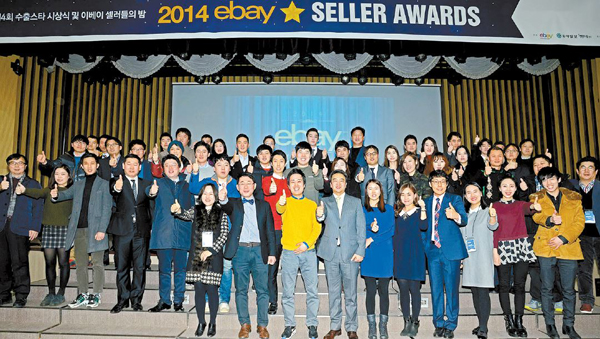 ‘Star Exporter’ representatives show a thumbs up in the 2014 Star Exporter Awards Ceremony. Provided by the company

Online shopping in Korea is going global, as overseas direct purchasing becomes an increasingly common means of consumption in and outside of the nation.

eBay Korea, the owner of two leading Korean online shopping malls G Market and Auction, is the nation’s biggest online export contributor. Since 2009, the company has been the only domestic distribution enterprise to utilize a cross-border trade system, in which transactions are made across international borders regardless of which country the buyer or seller is located. Because all users are essentially granted access to eBay, with its two hundred million users, there’s been a marked increase in the overseas export of Korean products through the sites.

In fact, G Market is the biggest platform in the nation that makes shopping easier for foreigners who want to make purchases from Korean merchandisers. In October 2006, it was the first among online markets with a direct buyer-to-seller sales system to create shops with English-language services. Since then, overseas shipping has been available for 70 countries worldwide, including the United States, Australia and Canada.

In the case of G Market merchandisers, the process of becoming an overseas seller is especially convenient, because no other steps need to be taken in order to display their products in the shops in English. To assist merchandisers facing challenges due to language barriers, there are exclusive consultants who act as advisors for foreign customers.

With the Korean Wave and a growing body of overseas customers, G Market’s English shops underwent restructuring, and in October 2013, Chinese-language shops were added to the system. This makes shopping easier for Chinese-speaking customers by providing tailored language services throughout the entire process of purchase, payment, delivery and customer service. Such systems were launched considering that roughly half of the users of the English-language shops were customers from China, Singapore and Taiwan.

Furthermore, eBay Korea was the first company in the nation to initiate an online export business incubator program. Through the system, the company provides offline education, online video education and foreign online sales training. It continues to grow more popular; in 2011, there were 9,000 attendees, while in 2013 there were 15,000. The company also cooperates with the government and other public institutions to initiate programs to export overseas the products of small- and medium-sized enterprises, as well as those of conglomerates, via online markets.

Since 2011, eBay hosted the “eBay Star Exporter Awards Ceremony,” rewarding the most outstanding merchandisers that export through eBay. In 2014, the event recognized approximately 1,400 star exporters, who’d sold a combined 35,000 products through the site in a six month period.

Song Seung-hwan, head of eBay’s cross-border trade department, said, “eBay Korea has been supporting the growth of small- and medium-sized enterprises through the global platform. We plan to continue this process so that domestic merchandisers with competitive products can reach out to the world via Internet.”